Council, An Bord Pleanála and city councillors raise concerns about height of scheme 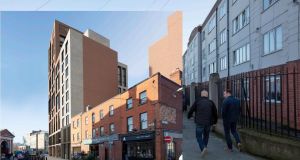 A 506-bed co-living development with a tower almost 50m tall – more than twice the Dublin City Council permitted height – has been proposed for a site beside the city’s Victorian fruit and vegetable market.

The Fruitmarket Partnership has applied to An Bord Pleanála for permission to build a shared accommodation scheme of 360 bedrooms, with a total of 506 beds, in 61 “apartment clusters” sharing kitchen and living facilities.

The scheme would be built in four blocks on two separate sites on Mary’s Lane and Halston Street in the city’s markets area west of Capel Street. The four blocks would range in height up to 14 storeys or 49m, more than twice the 24m maximum allowed under the Dublin City Development Plan.

Concerns about the height of the scheme have been raised by the council, An Bord Pleanála and city councillors. However, the developers pointed out the government’s building height guidelines in 2018 removed limits on heights in the city and overrides the city development plan. The 14-storey building would, they said, “create a striking, landmark building that will act as the gateway to, and a catalyst for, the future regeneration of the area”.

Three of the blocks, including the 14-storey tower, would be opposite the fruit and vegetable market on Mary’s Lane, which has been designated for a major regeneration scheme with a new retail market planned. The third, an eight-storey block, would be on Halston Street close to St Michan’s Catholic Church which dates from the early 1800s.

In a presentation to councillors on Monday, council planner Klara Crowley said the height “has been flagged as a concern from the outset by the planning department”. She said the council’s conservation office had also raised concerns in relation to the proximity of the development to the fruit market, which was a protected structure.

Labour councillor Joe Costello asked how the height could be justified given there was “nothing comparable in the area”.

“Will it not dwarf the fruit and vegetable market which is about to be regenerated and is the landmark structure in the area?” he asked.

Independent councillor Nial Ring said he was concerned about the 5.3m allocated per bedspace particularly in light of the coronavirus pandemic. He queried whether terms such as “clusters, shared courtyards and shared residents services” gave rise for particular concern given the pandemic.

An Bord Pleanála has sought justification for the height of the development “in particular the 14 storeys “ and has raised concern about the impact on the character and setting of the “features of conservation interest in the vicinity including the protected structures on the site and St Michan’s church and the market building”.

The developers said the design was of “high quality” and was “likely to complement and enhance the character, legibility and connectivity of the Markets Area as well as actively promoting the regeneration of the area”.

Submissions on the plan can be made to An Bord Pleanála until October 27th. A decision is due in January.