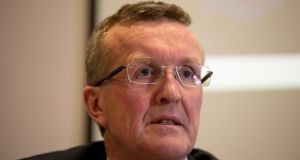 IFA president Tim Cullinan: Farmers feel increasingly like powerless spectators in the management of their own forests, locked into forestry under the replanting obligation without recourse. Photograph: Tom Honan for The Irish Times

The timber shortages resulting from the forest licence backlog continues to threaten the Irish forestry industry, which in normal circumstances exports €1 billion worth of timber each year, the Irish Farmers Association has warned.

In spite of recent forestry legislation introduced to enable the Forestry Appeals Committee function properly, the persisting backlog is “jeopardising jobs and businesses that have been built up over the last 40 years to support expansion of the private forest sector,” IFA president Tim Cullinan told the Oireachtas Agriculture Committee.

Current difficulties were also forcing sawmillers to import timber “when we are actually self-sufficient, which is unnecessarily endangering the health of the national forest estate through the potential introduction of pests and disease”, he told the committee, which is reviewing the forestry sector.

More than 1,000 farmers who planted land in good faith were caught up in the current forestry licence crisis, unable to get a licence to manage their forests, Mr Cullinan said.

“The consequence is that farmers no longer view forestry as a safe investment, they feel increasingly like powerless spectators in the management of their own forests, locked into forestry under the replanting obligation without recourse,” he said.

They are facing delays of up to two years and in some instances significantly longer to get the licences required to build a forest road or to thin their forest.

“The sustainable and timely management of forests is essential to optimise timber production and the economic return, but also to maximise ecosystem services and social benefits of these forests,” he added.

A natura impact statement (NIS) was now required with licence applications “if you wish to get a decision within a reasonable timeframe”. The majority of farm forests cannot support the cost of a NIS and are being disadvantaged and discouraged from managing their forests.

“If the system is not made more farmer friendly, the proposals set out in the programme for government and the afforestation targets in the climate action plan will not be achieved,” he warned, with farmers set to plant fewer than 1,500 hectares this year.

There are nearly 2,500 forest licences caught up in “the internal Department of Agriculture forest licence system”, he confirmed, and the delays are having a greater impact on farmers.

The IFA set out measures urgently needed, notably that no farmer has to wait longer than four months for a licence, as set out in the Forestry Act 2014. These should be introduced “with the same determination shown by this Government and Minister [Pippa] Hackett, which saw recent forestry legislation enable the Forestry Appeals Committee to function properly”.

The fungal disease, first reported in Ireland in 2012, had spread throughout the country and was going to wipe out 95 per cent of our native ash, he confirmed.

Importation of trees defied logic as ash is a native species and should have been propagated here, he added. At this point, 20,000 hectares of ash which was privately owned – mostly by farmers – was inevitably going to die.

Ash trees were planted by farmer-foresters primarily because it is a native broadleaf: fast-growing, and of high commercial potential, notably in hurley making, furniture, kitchens and boat building – and “has a high biodiversity value”.

The current Reconstitution and Underplanting Scheme announced in June was “unworkable” and was rejected by farmer/foresters as it does not adequately address the enormous losses sustained.

Affortestation pioneers who planted over 25 years ago, who are relied upon within the sector for advice and experience, were precluded from participation in the scheme. “This is leading to a prevailing disillusionment,” Mr O’Connell said.

The value of these plantations has been reduced to that of firewood. “At this point they should be 15 years away from a significant commercial value, not to mention the environmental benefit of decades of work being undone,” he added. “Farmer-foresters are climate custodians. There is no more efficient way of mitigating CO2 than planting trees.”

“If we want a forest industry in this country, address the ash dieback problem which is reducing confidence to zero,” he added.

LTWO director Simon White confirmed disillusionment was undermining efforts to develop native woodlands. The amount of research on disease-resistant ash was tiny, he underlined. “To rely on that is a little premature,” he believed.

Nobody had been held accountable for the importation of trees at a time the disease was rampant in Europe, Mr White pointed out.