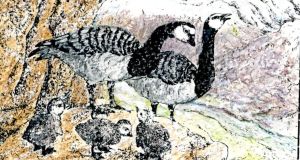 How do you count a big flock of winter water birds, feeding closely in the shallows or massed on a sandbar above the highest tide? Even with binoculars or a telescope and blinking wind-tears away, the shapes shift and overlap, the mingled forms dissolve.

Count the birds in fives, is the advice, with a click of the tally button for each cluster. As counters for the Irish Wetland Bird Survey (I-Webs) set forth in its 25th winter, its website offers volunteers pages on how it should be done. About 1,000 counters have taken part over the years, totting up nearly 53 million birds at hundreds of regularly monitored wetland sites across the island.

They keep track of the million-odd migrant birds that winter in Ireland, most of them from breeding grounds in the Arctic. Climate change affects temperatures there more than anywhere else on Earth, and on Greenland’s northeastern coastal margins it is threatening the breeding of Ireland’s winter shorebirds.

Snow may melt faster in summer, but as atmosphere draws more moisture north from a warmer ocean, it can now lay down a winter snow-pack a metre deep or more. This year the tundra was snowbound well into July, sealing off nesting sites and covering insects and spiders the birds would need for food. Sanderlings, knots, turnstones and others had a disastrous breeding season, often starving to death, and I-Webs warns its counters that smaller flocks may well result.

Another extreme phenomenon that could threaten ground-nesting birds is the return of “peak” lemming, the Arctic’s smallest mammal. Lemmings play a key role in the tundra, as consumers of plants and prey for its predatory birds, stoats and foxes. Until about 2000, its numbers in northeast Greenland fluctuated to a fairly regular, but still mysterious, four-year cycle. A peak in 2008, however, was followed by almost a decade of low numbers.

Earlier, in 1987, an Irish ecological expedition to the valleys of Germania Land, of which I was part, saw only a single active lemming burrow.

Today’s ecological research stems mainly from a Danish-run station at Zackenberg, set up below coastal mountains at 74 degrees N. Here in 2017, after the many lean years, came a remarkable peak in lemmings. Their winter burrows had been covered against predators by heavy snowfall late in spring, and nourishing grass can be quick to grow under drifts hollowed out by the thaw.

The abundance of lemmings brought an immediate response in the breeding of Arctic foxes and stoats and a rare arrival of snowy owls. Historically, high numbers of available lemmings were thought to divert the appetites of predators away from nest eggs and chicks. But last year’s summer at Zackenberg saw “very high” predation on all ground-nesting birds – even the long-tailed skuas that normally prey on lemmings themselves.

This comes as an international global study, involving UK universities, links climate change to higher predation of shorebirds nesting in the Arctic. Just published in Science, it analysed data from some 38,000 nests of 111 species in 149 locations across all continents. It found daily nest predation in the Arctic has trebled in the past 70 years and cited lack of lemmings as a possible cause, along with changes in vegetation and snowfall.

In Germania Land we watched foxes patrolling beneath the cliffs, waiting to snap up the chicks of barnacle geese as they flew from the high nesting ledges. Nearer home, the Irish red fox shares the blame for the rarity on our winter shores of the once-iconic native bird, the curlew. It is down to the last 130 pairs (and perhaps even fewer) dotted throughout the country, and there are fears of total extinction by 2023.

The winter influx to Ireland of migrant curlews from Europe has helped shield the loss of this iconic bird and the silencing of the cry – cour-lee – from almost all the native uplands where it bred.

In 2016 the remarkable Mary Colwell, a naturalist and producer at the BBC Natural History Unit, went on an 800km walk across Ireland and the UK to raise awareness of the crisis and to raise funds for conservation. The journey took her from Lough Erne, down the Shannon, across the midland bogs, on to Wales and English grouse moors, meeting curlew field workers and giving talks in parish halls and colleges.

At one of them, Colwell reported, “no one in a room of young people studying agriculture had heard of, or seen or heard a curlew”. On the road, she played a tape of its call to an elderly hill farmer and saw it bring tears to his eyes.

Her journey resulted last spring in Curlew Moon (William Collins), a book to inspire hope that new and energetic habitat protection and predator control will give the bird a future. But predators remain key, and shooting foxes and trapping crows seems, to her regret, to be a necessary part of it.