From the definitive Burren book, to a pine marten celebration and a study of the Liffey 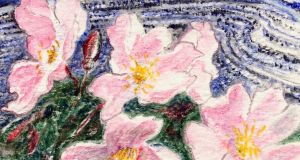 There was a time when the strange and magical landscape of the Burren attracted just a few roaming naturalists, mostly of the gentlemanly, even clerical, kind. Today, as a star attraction along the Wild Atlantic Way, the Burren’s limestone hills peer over more than 10,000 visitors a year.

As the coastal road at Black Head and Poulsallagh becomes clogged with cars and coaches, and tourists spill into the interior to picnic on its flowery pavements, concern about ecological wear and tear was bound to grow. “The Burren should never become a plaything or be over-promoted in the interests of tourism,” writes David Cabot. “It is the jewel in the ecological crown of Ireland.”

With botanist Roger Goodwillie, Cabot has produced a definitive update to its enchanting, often puzzling, natural history. Published in Collins’ prestigious New Naturalist series, the 464 pages of The Burren come glossily enriched with photographs, mostly by the accomplished Fiona Guinness, but also with a weighty price of £65 (€73). Even as a Christmas present, therefore – and sadly, perhaps, for Irish bookshops – some online discount-hunting may be necessary.

It’s a serious, expert book, but smoothly readable and jargon-free. Both authors bring a long devotion to the Burren. Cabot, now a leading ornithologist, first explored it in company with the great botanist David Webb.

Goodwillie is an authority on the flora of the Burren’s turloughs and fond witness to the “drama of the first autumn rising” as subterranean water swells up to fill the lakes.

The uniqueness of the Burren, presenting such strange mixtures among its plants, is chronicled at a crucial time. “An unintentional garden”, it was first grazed by woolly mammoths, giant deer and wild horses and now by cattle driven up from the valleys to relish the limestone’s winter warmth. Great change has arrived not only with tourism, but with progress in sustainable farming pioneered, with EU and government support, by the Burrenbeo Trust.

The remnants of old woodland and dense stretches of mossy hazel scrub sheltered the survival of the pine marten, elsewhere persecuted or poisoned almost to extinction as Irish sheep-farming intensified in the mid-20th century. In Britain, the earlier toll from gamekeepers cleared the marten from England and forced its refuge in the wilder west of Scotland and Wales.

It was in the Burren’s Dromore Wood that British pine marten devotee Johnny Birks saw his first Irish one. After working with the Vincent Wildlife Trust to help restore the martens in the UK, he has now produced a much-needed popular book on the species. Pine Martens (Whittet Books) is a lively, engaging and thorough account of Birks’s favourite mammal and its differing habits and fortunes in these islands.

Some of the most significant recent research has come from zoologists in Ireland, such as finding that the spread and predation by the pine marten had reduced the alien grey squirrels in the midlands. A study in Northern Ireland, adds Birks, “suggests that grey squirrels are much more naive than reds when it comes to the scent of pine martens”.

The uplands and valleys of Ireland’s southeast inspired a gifted partnership for Comeragh: Mountain, Coum, River, Rumour (Whimbrel Press). Waterford photographer Paddy Dwan and poet Mark Roper spent five years on this, the third of their books devoted to the character, culture and natural history of the region. In richly textured images and prose, they portray this comparatively unsung upthrust of Munster, glacially sculpted and bathed in an often dramatic light.

In this landscape, Dwan’s moments with birds are also exceptional, from crossbill and buzzard to kestrel and cuckoo. Roper fell into a ravine and broke his neck, but went on to follow the story of the mountains, woven with the local lives of those who know them best.

Christopher Moriarty knows Dublin’s big river – from its first nascent trickles in the mountains to the last freshwater swirls into the sea. He spent much of his career as a government fishery biologist delving into freshwater ecology, and his early explorations of the Liffey led to a lifelong fascination with the history of its bridges, riverside architecture and urban water supply.The River Liffey: History and Heritage (Collins Press) is successor to Moriarty’s Book of the Liffey, written 37 years ago, and takes vigorous account of a greatly bigger and even thirstier city.

Enjoyment of the capital’s outdoor world has been enriched by fine new parks, and walking and cycling trails that appreciate the river, its inland lakes and wildlife. Their surrounding and intriguing array of historical architecture has become Moriarty’s special hobby, and for Dubliners the book is a treasury of ideas for somewhere new to go this weekend.