Past four years were the hottest on record, new data shows 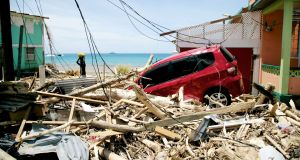 Damage in Roseau on the Caribbean island of Dominica, following the passage of Hurricane Maria in 2017. Photograph: Cedrick Isham Calvados/AFP/Getty Images

Global temperatures have continued to rise in the past 10 months, with 2018 expected to be the fourth warmest year on record. Average temperatures around the world so far this year were nearly 1C above pre-industrial levels.

Extreme weather has affected all continents, while the melting of sea ice and glaciers and sea level rises continue. The past four years have been the hottest on record, and the 20 warmest have occurred in the past 22 years.

The warming trend is unmistakeable and shows we are running out of time to tackle climate change, according to the World Meteorological Organization, which on Thursday published its provisional Statement on the State of the Climate in 2018.

The WMO warned that, on current trends, warming could reach 3C to 5C by the end of this century. “These are more than just numbers,” said Elena Manaenkova, the WMO deputy secretary general. “Every fraction of a degree of warming makes a difference to human health and access to food and fresh water, to the extinction of animals and plants, to the survival of coral reefs and marine life.”

The world has committed to keeping warming to no more than 2C above such levels, with an aspiration to limit rises to 1.5C, which the Intergovernmental Panel on Climate Change (IPCC) has said will cause the dieback of coral reefs, sea-level rises and extreme weather in many regions.

Greenhouse gas levels were also recently found to be at record levels, and a UN report this week said the world must triple its emissions reduction efforts to stay within 2C, and efforts five times greater than currently taking place would be needed to stay within 1.5C.

The IPCC found that continued rises in greenhouse gas emissions over the next 12 years could result in a breaching of the 1.5C limit.

On Monday, the UK government said summer temperatures could be 5C hotter by 2070, making this year’s heatwave the norm for the future, while winters could get much wetter.

The WMO found the extent of Arctic sea ice in 2018 was much lower than normal, with the maximum in March the third lowest on record and the September minimum the sixth lowest. Meanwhile, the oceans were absorbing record or near-record amounts of heat at certain periods.

The year started with a weak La Niña event but by October there were signs of a return to El Niño conditions, which can raise global temperatures further. There were a greater number of violent storms than usual, including 70 tropical cyclones in the northern hemisphere, compared with the long-term average of 53.

Storms brought devastation to the Mariana Islands, the Philippines, Vietnam, Korea and Tonga, while hurricanes Florence and Michael caused substantial damage in the US. Wildfires raged in Greece, Canada, California and other areas, while floods devastated Kerala in India and displaced more than 1.4 million people. Japan also experienced serious flooding, as did east Africa.

Petteri Taalas, the secretary general of the WMO, a leading authority on climate change, said: “We are not on track to meet climate targets and rein in temperature increases. If we exploit all known fossil fuel resources, the temperature rise will be considerably higher.

Ms Manaenkova added that every effort to reduce greenhouse gases and the impacts of climate change was worthwhile. “Every bit matters,” she said, citing the harm done by temperature rises to every aspect of life, including economic productivity, food security, glacier melt and water supplies, and the future of low-lying islands and coastal communities. – Guardian