It’s a long way to nationwide climate action, but not in Tipperary

A local climate action initiative in Tipperary has led to 150 homes being retrofitted and is running pilot demonstrations to show how schools and swimming pools can lead the energy transition. Video: Enda O'Dowd 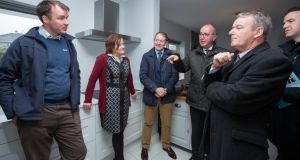 Travelling along the M7 motorway on a grey Tuesday, a ferocious gust of a wind blows open a luggage compartment door on the bus as it makes its way to Co Tipperary in driving rain. A temporary lull is followed by a shower with severe volumes of water. It’s a small reminder of how extreme weather associated with climate change is more regularly encroaching on Ireland.

The possibility is remarked upon among the unusual mix of passengers: TDs and senators – members of the Climate Action Committee – who are venturing beyond Leinster House to view evidence of climate action in parts of Ireland.

They visit a house that has undergone a deep retrofit (now almost “carbon free” in emissions terms); a school powered by solar panels and heat pumps; a municipal pool heated by biomass; and “zero energy” buildings.

Children are more alert and willing to learn. They don’t switch off after lunch. There is a general improvement in their health

Ten years ago, the oil or gas boiler would have been the common feature in all such buildings – accompanied by big bills for fossil fuels. Here, they have been replaced with cheap, clean, renewables.

The committee has an immense task: to determine how Ireland can adopt far-reaching recommendations of the Citizen’s Assembly to become a world leader on climate change. It is among the worst performing developed countries in reducing emissions. This will inform its report on what should be in the National Energy and Climate Plan that Ireland must submit to the EU.

The visit is hosted by Tipperary Energy Agency (TEA), a not-for-profit set up by Tipperary County Council 20 years ago. It’s a one-stop shop providing energy auditing, design, and procurement services, which typically gives a 60-80 per cent reduction in household energy costs. The transition to a decarbonised Ireland will require more than 1.5 million homes to be retrofitted in coming decades at a cost of €50 billion; most houses require an investment of €30,000-€50,000.

The home of Margaret and Phil Hennessy in Nenagh is the first stop. Faced with having to renovate a 1970s house, getting the energy agency’s support was “a no brainer”, Margaret says. The agency project managed installation of new windows, doors, insulation, ventilation, a heat pump and solar panels.

Electricity bills have risen by €20 a week but solid fuel and oil costs have been eliminated, she explains. The total cost was €64,000 and they benefitted from a 50 per cent Sustainable Energy Authority of Ireland grant.

“This is what actual climate action means,” Tipperary Energy Agency chief executive Paul Kenny tells the delegation. It’s what makes replacing the importation of oil, gas and coal possible. What’s more, the technology is not rocket science: a heat pump is the reverse of an air conditioning unit, while putting in larger radiators is easily done, he adds. The agency has overseen the retrofitting of 150 homes.

At nearby Youghalarra National School, an €80,000 renovation has put an end to cold classrooms, a “really bad” smell due to moisture, and heavy use of heating oil, Kenny says.

They are saving up to €5,000 in annual oil costs. Teachers no longer complain of stuffy rooms. Fresh air lasts all day and is replaced overnight. “Children are more alert and willing to learn. They don’t switch off after lunch. There is a general improvement in their health,” says principal Brian Russell.

The project was a pilot demonstration with the Sustainable Energy Authority, Kenny notes, as the Department of Education did not believe heat pumps would work in such a setting. The technology works, provided it is installed correctly, he says. The “energy transition” is going to be driven by electricity, and we should start by “just taking fossil fuels out of the equation immediately”.

At Nenagh Leisure Centre, the sun begins to shine and the dividend in power is indicated on a large screen inside. Senior executive planner Nuala O’Connell outlines how climate change and energy objectives permeate county council policies. On renewable energy, the conversation with councillors has changed, she says. It is moving beyond wind energy to anaerobic digesters; “is solar a good idea?”; community involvement and “what’s happening elsewhere?”

Iva Pocock of Cloughjordan Ecovillage – and a former Irish Times journalist – describes how the project is modelling the transition to a low carbon society. Established more than a decade ago, the ecovillage is home to 100 residents, a hostel, bakery, enterprise centre, woodland, allotments and Ireland’s first “community-supported agriculture” farm.

“Research shows that the ecological footprint of a Cloughjordan ecovillage resident is less than half that of the average Irish citizen,” she adds, pointing proudly to buildings with no chimneys – a district heating system uses renewables.

Committee vice chairman and Sinn Féin TD Brian Stanley acknowledges obvious barriers to progress: planning restrictions; limits on use of solar panels, and inability to feed excess electricity into the grid.Sen Paul Daly of Fianna Fáil cites the need for “serious community buy-in and leadership at council level”. While the ecovillage was “a lifestyle choice” there was a lot to be learned from the concept, particularly on district heating. What was facing Ireland on climate change was daunting, he said, “yet the examples today are so simple”.

“The energy transition isn’t a technical challenge,” Paul Kenny stresses at a final briefing. “It’s a question of mobilising society. We need to create the ecosystem to support homeowners when they want to do it, to incentivise them with grants. We need to put a stick out there in terms of carbon tax but ultimately with the objective of decarbonising Irish buildings.”

A total of 17 energy agencies were set up in Ireland in 2005; only three survive, even though a radical energy transition has become more urgent. Running a social enterprise is not easy, Kenny stresses, but the model needs to be applied in every county if decarbonisation is to happen – or at least on a regional basis.

A late lunch at the Middle County Café in Cloughjordan coincides with primary school children sauntering home. Their presence flags what the town has achieved: regeneration of its population, up by 250 from some 500 people over the past decade. At least some of the next generation can be happy that they are already growing up in a community leading the energy transition that all of Ireland has to pursue sooner or later.