A proposed cycle scheme in Navan town will mean the demolition of a 250-year-old wall as well as 22 mature trees. 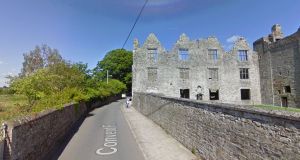 Covent Road, which runs alongside Athlumney Castle, has been earmarked as part of the route for the proposed Navan 2030 Athlumney to Trim cycle scheme. Photograph: Google Street View

An online petition has been started to protect an old stone wall and nearly two dozen trees along a street in Navan town which has been described by actor Pierce Brosnan as “a part of my five year old’s memory”.

Covent Road, which runs alongside Athlumney Castle, has been earmarked as part of the route for the proposed Navan 2030 Athlumney to Trim cycle scheme.

However, local campaigners have warned that the area is of “huge archaeological interest” and that the plans for constructing the cycle path, which would involve knocking down an old stone wall connected to Athlumney Castle, are “fatally flawed”.

Happy St Patrick’s day ...☘️☘️☘️☘️☘️☘️Keely and I went to Ireland a few years back now, and I took her to where I grew up on the banks of the river Boyne, to the small bungalow my grandfather Philip Smith had built, the home was called Boyne crest. The home sat alone, across the river from Navan town in County Meath, Eire. On summers evenings he and I would walk up the lane hand in hand as the last slow rays of sunshine fell through the canopy of trees. This road that Keely and I stand on in the photo is a part of my five year olds memory. Before you got to where this photo was taken he and I would pass where the little people lived. It was some crumbled, overgrown, roofless, magical and abandoned wee house, tucked into the side of the shady road. By it’s locked and rusted companion of a gate we stood waiting to see the little people. The trees above us rustling softly and the sun that dappled through them made us both see magic in the silence of waiting to see them. I never saw them, not even once, but I did believe in them, for he my grandfather was a good story teller. A kind and loving man, who was loved by all in Navan town .He was the only father figure I knew. He believed in me .

The stretch of road in question featured in a photograph on Brosnan’s Instagram account earlier this year. The Navan actor described walking along the path with his grandfather Philip Smith and the stories he told of the “little people” who lived in an “abandoned wee house, tucked into the side of the shady road”.

“On summer evenings he and I would walk up the lane hand in hand as the last slow rays of sunshine fell through the canopy of trees,” he posted in March 2018 alongside a photo of himself and his wife on Covent Road. “This road that Keely and I stand on in the photo is a part of my five year old’s memory.”

The Save Navan Town Heritage group, representing local residents, historians and archaeologists, have launched an online petition calling on Meath County Council to reconsider its plans for the proposed cycle route along the road which appeared in Brosnan’s photo.

The group has proposed creating the cycle lane as part of a “shared space” with motorists rather than knocking down the wall and trees. “We feel that decisions are being made by the council that are not best for the heritage of the town or what people want to see done in the town,” wrote the group in the petition.

Public consultations on the cycle scheme were held in October 2018 with work proposed to begin in 2019 and be completed by 2021. The cycle route would create “safer and more attractive active travel routes for cyclists and pedestrians alike” and “meet local and national objectives in terms of healthy and active living,” according to the proposal from Meath County Council.