Attenborough’s voice has ‘echoed around the world’, Robinson says

World renowned naturalist, Sir David Attenborough, has told a UN climate change conference that the continuation of civilisations and of the natural world is in the hands of world leaders. 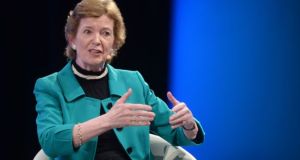 She was responding to his speech at the opening ceremony of the COP24 UN climate conference in Katowice, Poland, where he called climate change “our greatest threat in thousands of years”.

Sir David told world leaders that climate change could lead to collapse of civilizations, and much of the natural world.

Ms Robinson said it had been a great idea to have him speak at the conference. “It has worked wonderfully, his voice has echoed around the world.”

“We’re running out of time. It is important to take action now. We must be more ambitious. Big changes are happening. There is more concern at political level. The Government and political parties are taking the issue more seriously.”

There is a long way to go to catch up, she said, “but we’re on the right track.”

Ms Robinson said there are very tough targets, “but they are doable.”

“We must take action with much more ambition to be on track for a carbon neutral world. That’s why what David Attenborough said is important. The situation is potentially catastrophic, but it is doable.

“People need to take steps in their own lives. They need to get cross if governments are not doing enough.”

She said that Ireland is changing and needs to be a leader. However, any changes need to be socially just, inclusive and thoughtful, she added.

Mrs Robinson pointed out that changes in the peat industry need to include “a just transition”, with new jobs and new training, while a carbon tax should not have an impact only on those on low incomes who rely on fossil fuels for work.