Curled octopuses among the many washed-up victims of Storm Emma 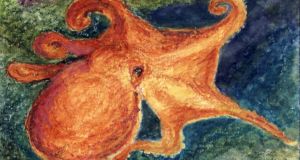 Tossed ashore in the waves, curled octopuses made sadly pallid little corpses, their tentacles limp as broken springs. In the wake of Storm Emma, they offered a novelty for the cameras of east coast beachcombers, out early and hopeful along the waves. (see Eye on Nature)

The seagulls were standing aside, too well-fed to fly, contemplating a quite inexhaustible beachful of food. Drifts of mollusc shells were gaping to show the soft bodies of cockles, mussels, razorfish and many more.

Storm Emma was “perfect” in rare and deadly coincidence. Spring tides let a sudden sea temperature drop strike deeply at low tide just offshore, numbing the energies of marine life and its chances of retreat. The Siberian gale spun wheels in the surf to tumble the creatures ashore.

In England’s North Sea, with a longer fetch for the wind and a shallow slope of coast, beaches from Yorkshire to Kent were heaped with spectacular, ankle-deep carpets of starfish and crabs. Scattered lobsters were plentiful enough for wildlife rescuers to gather and save in tanks for later return to the sea.

“Post-apocalyptic” was the term for such images on the website Science Alert. It linked, in passing, to a mass stranding of starfish – some 50,000 – on a beach at Lissadell, Co Sligo, in 2009. Such storm-swept events are not that rare, especially on coasts rich in mussels, the starfish’s regular prey.

Another possible factor has come to light in research by Plymouth’s Marine Institute. Starfish are normally slow movers, their thousands of tube feet, each with a vacuum grip, inching them over the seabed. But an underwater video survey in the English Channel found them curling into a ball and rolling with a fast-moving tide. “Starballing” is the name for an action never previously recorded.

Emma’s castaways, photographed by readers, have included starfish of several species in a fascinating gallery, much of it quite unfamiliar to walkers on the shore.

The curled octopus, for example, may occasionally get stranded in a rock pool between the tides (this once delighted a beach-going family at Seapoint, Co Dublin) but is more at home at greater depths among concealing rocks.

The little squat lobster, a slightly sinister handful, is not a true lobster at all but belongs to a separate family nearer to crabs. It lives among, and under, rocks, down to 100 metres deep. Sea squirts. sea mice, brittle stars offered other strange shapes and modes of life for scrutiny at the tideline.

By a good chance, Emma and its aftermath have coincided with publication of Ireland’s Seashore (Collins Press, €15) a field guide to the island’s beach and intertidal species. It is the enterprise and hard work of two young marine biologists, Lucy Taylor and Emma Nickelsen, both based in Cork, where UCC has its coastal and marine research centre.

With some 7,500 km of shoreline and islands, Ireland has an exceptional range of habitats, from exposed rocky coast and pebble beaches to sandy shores and estuaries, sea lochs and muddy inlets. Setting out to photograph all their plants and animals, in a maze of watery, windy settings, has been an exacting enterprise.

Here and there, unsurprisingly, they’ve missed one. The jellyfish, for example, are nearly all there but for the troublesome lion’s mane. One feels mean to have noticed, given the wealth of illustration of an immense variety of plants and creatures great and small.

The guides put names and histories on some casual finds of my own beachcombing years. That disc of shell with a hole at one end, shining pearly among my windowsill bric-a-brac, belonged to a saddle oyster, and its wavy contours were shaped to the rock it grew on.

The clump of soft and tawny felt was not a plant at all, despite the name of sea chervil, but a colony of bryozoans, tiny animals. And the tiny cowrie shell, like a rolled-up pink fingerprint, housed a predatory snail that chewed at sea squirts many times its size

One look at the huge variety of molluscs carpeting some storm-swept east coast beaches (a notable stranding at Rosslare, Co Wexford) shows the value of such a field guide as this. There’s even a step-by-step list of questions to send you to the right pages (25 kinds of bivalves and almost as many snails).

The text is ample, expert and rooted in Irish experience. It is also, this being a book designed for the pocket, rather small and printed in the shade of grey so current in modish book design. Even paler pastel conceits make some important information quite illegible.

So take your glasses and hope the sun is shining on a nice calm day. Or you could pocket (or photograph) whatever it is and wait until you get home.