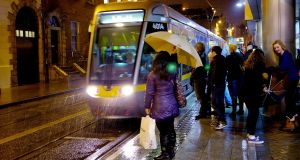 Throughout the day, Luas management tweeted about delays of between 15 and 20 minutes on both the Red and Green lines. File photograph: David Sleator/The Irish Times

Long delays and overcrowding have now become “the norm” for Luas passengers, a Fine Gael Senator has said following another day of service disruptions on Tuesday.

Throughout the day, Luas management tweeted about delays of between 15 and 20 minutes on both the Red and Green lines.

At about 9.15pm, the Green line had been restored following a technical fault at Dundrum, but with delays of about 20 minutes. The Red line was operating normally.

Fine Gael Senator Neale Richmond described events as being “yet another day of terrible service” on the Green line with commuters stranded, late for work or forced to walk or take taxis.

“It seems now that lengthy delays have simply become the norm for Luas commuters as trams are increasingly overcrowded and frequency is becoming ever more sporadic,” he said in a statement.

“Understandably vexed commuters once again inundated my office all day with complaints following yet another terrible day of service.”

He cited delays of up to 30 minutes between the Bride’s Glen and Sandyford stops, and said passengers had been “dumped out” at Harcourt, Beechwood and Milltown stops and told to walk the line until Balally as “yet another tram had broken down”.

“Around 100,000 commuters use the Luas every day, paying high fares, to see the once flagship service crumbling with excessive delays, stoppages, overcrowding and insufficient staff numbers,” he said, insisting questions on reliability needed to be addressed.

A spokesperson for the Luas operator could not be reached for comment on Tuesday night.

There have been problems with Luas services and with traffic in the city centre since the introduction of the Cross City line last December.