How the west gave a poet his dream and identity 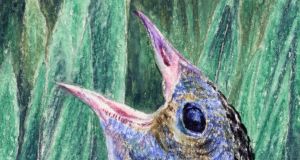 Connemara corncrake: Inishbofin, out on my horizon, is now one of the bird’s few strongholds and probably where Richard Murphy first heard its “staunchly nailed iambics”. Illustration: Michael Viney

Quicken your tune, O improvise, before
The combine and the digger come,
Little bridegroom. – Richard Murphy

I was reading one of the many online tributes to the poet, dead at 90 in Sri Lanka, when an email from BirdWatch Ireland pinged into my in-box. It carried news of the continuing decline of the corncrake, for the third year in a row .

Last summer saw corncrakes down to 140 pairs. Even their long refuges in the Shannon callows have now fallen quiet, leaving the last, rasping chants to the coasts and islands of the west.

Inishbofin, out on my horizon, is now one of the bird’s few strongholds and probably where Richard Murphy first heard its “staunchly nailed iambics”. The island holds my own best memories of its calls, echoing at dusk along the rushy valley to East End.

Richard Murphy was a divided man, culturally and personally. Poetry gave him resolution, and his return to Connemara in the 1950s the needed sense of place

The passing of the poet had me reaching for connections. Among them, I once slept a night in the room where he was born, in a modest, rambling “big house” at Kilmaine, on the border of Co Mayo and Co Galway. From there, down the avenue of limes, came the Connemara pony that kept our young daughter such amiable company.

Milford House meant much to Murphy’s own childhood, its walled garden the Pleasure Ground of his last collected poems. The family outings to the Connemara coast, the candles and oil lamps at evening, outshone his regrets over Milford’s “damp etchings” and decay.

The house was part of Murphy’s peripatetic early life between Sri Lanka, Ireland and England, an Anglo-Irish blend of colonial comings and goings. (His father was a governor general.) Then came public school and Oxford, with lectures from CS Lewis and JRR Tolkien. Murphy emerged lean and hawkishly handsome, with a lasting patrician charm.

He was, however, a divided man, culturally and personally. Poetry gave him resolution, and his return to Connemara in the 1950s the needed sense of place. Its landscape, nature and folk life produced the long, dramatic poems Sailing to an Island, The Last Galway Hooker and The Cleggan Disaster, with which he framed a life’s identity.

For Michael Longley these “released a new kind of music”, their majestic narratives attracting “us western wannabes” among the new Irish poets of the 1960s. The Aran Islands drew Longley, like Derek Mahon and Seamus Heaney, on poetically significant visits. Longley, alone, came back to find Mayo an annual refreshment of his creative purpose.

Murphy threw himself physically into life at Connemara’s northwestern corner. He was smitten, for example, by what one poem confessed as “Stone Mania”, notably for building with slabs of pink local granite assembled from tumbledown cabins. He used them for a house in Cleggan and a small hexagonal “hilltop sundial cell” overlooking Omey Island and the sea.

Sylvia Plath, notoriously, rubbed her leg against Murphy’s beneath the table. This found no response but gave him a title for his 2002 autobiography, ‘The Kick’

His rising reputation brought him fellow poets, among them Ted Hughes and Sylvia Plath, highly strung on the eve of their tragic break-up. Plath, notoriously, rubbed her leg against Murphy’s beneath the table. This found no response but gave him a title for his 2002 autobiography, The Kick.

Inishbofin, a ferry ride from Cleggan, is the place he most often called home, frequently in Day’s hotel but for a while beside the pier in the Ave Maria, the last hooker built in Galway. It was an outmoded longline trawler whose engine had failed, “old, solid, cow-like from some angles, but strangely beautiful”. Its brown-sailed arrival in the island harbour clinched Murphy’s purchase and devotion.

An early passenger was Louis MacNeice, the Ulster poet whose Protestant (and missionary) forebears had lived on Omey Island. MacNeice, however, a rare visitor to the west, held himself detached from “the constituencies of quartz and bog-oak”.

Murphy’s most romantic purchase in the 1960s was High Island, or Ardoileán, a few kilometres off Omey, its deep, narrow inlets daunting in any but the gentlest seas. He was fascinated by its monastic remains and atmosphere and even built a beehive hut of his own. Eventually, in 1989, he gave the island to the care of archaeologists and the Office of Public Works.

His High Island poems, born of windswept solitude, are among his most alive to nature. Storm petrels, chirring from within the ancient, lichen-covered walls, prompted “Pulse of the rock / You throb till daybreak on your cryptic nest / A song older than fossils, / Ephemeral as thrift. / It ends with a gasp.”

The island’s grey seals mated in shadowy waters. Murphy watched from above: “When the great bull withdraws his rod, it glows / Like a carnelian candle set in jade.”

Ethna and I once camped on the heights of Ardoileán, abandoned there by currach on a fine summer morning. We sometimes glimpse the island now at a storm’s far horizon, its great white towers of spray rising up and silently falling.

Patricia O’Connor trial: Daughter told gardaí she didn’t ‘harm a hair’ on her head 19:06
Mitchell O’Connor does not want drugs decriminalised ‘in our country ever’ 19:09
Motorists urged to take care after snowfalls in west of Ireland 18:54
Man jailed for sexually assaulting woman with special needs 18:12
Doctor struck off register for failing to keep up with professional competency 17:43