Ethna, Olivia and the mystery of the Killiney Bay amber

Another Life: Michael Viney on a rare find by two young sisters 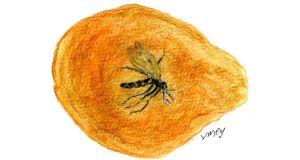 Ancient amber: about one in 1,000 blobs of Cretaceous conifer resin enveloped an insect. Illustration: Michael Viney

In the wake of Storm Ophelia, last autumn, sisters Ethna and Olivia, who are 11 and nine, couldn’t wait to get down to the shore below Killiney, Co Dublin, to see what the big waves might have brought.

Among the debris at the tideline, tangled with weed and broken shells, a gleaming, fist-sized fragment caught their eye. It was light to pick up and had a warm feel, like plastic. But the rich, deep glow at its heart lit up a number of bubbles, and the rock had a special smell –“like resin or something soapy”, as they wrote to “Eye on Nature”.

“Is it a rock?” they asked, as if something more exciting were possible and no one had murmured “amber”. There are ways to test for this precious fossilised conifer resin, and we offered a few to try. The sisters rubbed it hard with a woolly jumper, to make bits of tissue cling to it electrically, scratched it with a knife, to make splinters, and poked it with a hot needle, to release a pleasant piny smell. (Plastic smells foul.)

‘We really think it could be amber!’ wrote the girls. But this sizeable chunk deserved professional judgment. Museum appointments were arranged

In ancient conifer forests, their species now virtually extinct, resin had oozed to heal and harden over wounds made by bark-boring beetles or birds and animals, or fires. It could occasionally – perhaps in one of 1,000 blobs – envelop an insect, as in the momentous mosquito of Jurassic Park. The Killiney amber shown in “Eye on Nature” took no prisoners, but my drawing immures a midge.

“We really think it could be amber!” wrote the girls. But this sizeable chunk, 15cm by 5cm, deserved professional judgment. Appointments were arranged at museums in Dublin and Belfast.

At the National Museum of Ireland Dr Matthew Parkes, its geology curator, had a “Bronze Age handling box” with a piece of raw Baltic amber echoing the colours of the find from Killiney. A string of amber beads, like those made for affluent Bronze Age wives, spoke of a flourishing Baltic trade with Ireland.

At the Ulster Museum in Belfast its palaeontology curator, Dr Michael Simms, confirmed the amber very positively and agreed it most probably came from the Baltic, source of nearly all European fossil amber.

To suggest a definite origin for something floating in the ocean and millions of years old can ask a lot from oceanography. Baltic amber may well have travelled in ice sheets moving out across the North Sea. On the coast of Norfolk some local beachcombers regularly walk the tideline on the chance of finding small pieces now and then.

Baltic amber could have wandered even farther. It belongs to the Cretaceous geological period, still the time of the dinosaurs, and 2009 saw discovery of tiny fragments of the earliest known spider’s web in amber found at Bexhill, in east Sussex, on a beach well known for dinosaur tracks.

The rocks of the Cretaceous age – from about 146 million to 65 million years ago – have been virtually lost from Ireland, and layers of its chalk surviving beneath basalt in the north Antrim cliffs speak of ocean sediments, not forests of Sciadopityaceae, the family of giant and extinct Scandinavian conifers so prolific with flows of resin.

It does have the look of Baltic amber, and Dr Simms has wondered on the chance of it being lost overboard by a Viking amber trader

Currents from the North Sea flow on westwards in the English Channel and mingle with those surging in across the continental shelf of the Atlantic south of Ireland. Storm Ophelia, however, thrusting powerfully around into the Irish Sea, was a comparatively rare event, producing (along with an abundant stranding of Portuguese men-of-war) an extremely rare piece of flotsam.

Dr Simms agrees that it is difficult to see how a big chunk of Baltic amber could have ended up on the shore of Killiney Bay. But it does have the look of Baltic amber, and he has wondered on the chance of it being lost overboard by a Viking amber trader.

Olivia and Ethna quite fancy another explanation. Across the Atlantic, in the West Indies, amber is mined commercially in the Dominican Republic, for jewellery rich in tropical insects. The Caribbean and the Gulf Stream have carried a steady drift of buoyant objects to Ireland – I have a dish of tropical sea beans delivered by storms and collected over the years.

Another transatlantic source of amber occurs farther north, in clay pits on the New Jersey coast. The first Cretaceous-age ant was described from a fragment found there in 1966. Others held ancient fungi, plants and feathers.

There are technical tests to suggest the source of amber, but these need very specialised equipment. Given their persistent curiosity to date, I would not put it past Olivia, Ethna and their fully encouraging parents to find a way of solving the Puzzle of the Killiney Bay Amber.