How much would you pay for cleaner beaches and safer water?

Another Life: Michael Viney on the cash value of Ireland’s coastal ecosystem 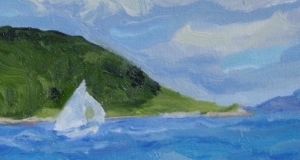 The summer of 2011 can’t have been so bad. There were plenty of swimmers, surfers, kayakers and windsurfers along the strands of Ireland’s west to answer 20 minutes of questions for a scientific survey. These explored how much they would pay on each trip to the shore for cleaner beaches, safer water and more wildlife – key aims for improving the EU bathing-water directive.

Half of them were young surfers, averaging 92 trips to the beach in a year. Eighty-five per cent said they or someone in their family had, at some time, suffered stomach bugs or ear infections caused by sea bathing in Ireland.

They were asked to choose between levels of cost for degrees of beach cleaning and water quality. The different “recreationalists” made different choices about how much they would willingly pay. It averaged out at €6.78, which satisfied the research team that the benefits of implementing the EU’s directive “would clearly be substantial”.

Research on ‘willingness to pay’, however sanguine it may seem, can help decisions on balancing the ‘ecosystem services’ of the natural world

Research on “willingness to pay”, however sanguine it may seem, can help decisions on balancing the “ecosystem services” of the natural world. Those of Ireland’s coast, estuaries and ocean are under many competing pressures, so obvious economic values (of fisheries, say, and aquaculture) can conflict with social, cultural and environmental ones.

The 2011 beach research was just one of 112 such studies, many international, considered by a team from NUI Galway and Galway-Mayo Institute of Technology. Its final report, now online from the Environmental Protection Agency, is fascinating.

In a synthesis of all the recreation studies and their figures – a “meta analysis” – and with an estimate of 96 million marine-recreation trips a year (based on a survey of more than 800 people), the annual value comes out at €1.68 billion. An unexpected share comes from sea angling: €351 million from fishing from the shore and nearly as much from using boats. Sea bass alone, a tightly regulated angling catch, are worth €81 million a year.

For commercial “provisioning services” such as fisheries, aquaculture and seaweed harvesting, economic values are market driven, and the team puts a cash value to each of a great variety of fish. But how do economists put a price on the aesthetic value of the coast?

The worth of a beautiful view shows up in the extra charge for a hotel room overlooking the sea, or in the price of a house overlooking the ocean or an estuary, compared with one inland. “Hedonic pricing models” (hedonism = the pursuit of pleasure) can even estimate aesthetic values by county and distance from the sea. Boggy Leitrim’s fragment of shore comes at the bottom and the coast of Dublin city on the crest of the wave. On our own Mayo hillside, looking out to the islands, we have always had a view for millionaires.

A more tangible national benefit is the sea’s absorption of polluting outflows from the land – an ecosystem service with an annual value of more than €316 million. The coast itself defends the land, its salt marshes blunting the energy of storms.

The researchers measured the value of coastal defence offered by some 60 Irish salt marshes, as cost-saving alternatives to sea walls, at about €4,800 per metre – a total of €860 million, with a saving on maintenance of €11.5 million a year.

Even carbon sequestration comes into the reckoning, as the absorption of carbon by coastal ecosystems such as sand dunes and salt marshes reduces the social cost of removing it from the atmosphere. Our estuaries, on the other hand, are releasing carbon because of the processing of their carbon-rich particles. Most of the €800 million or so for the value of carbon absorption is left to the open sea.

Such numbers throughout the report are not always backed by certainty. But they offer impressive insights into the valuation of ecosystem services, many of them culturally important.

I have not been a fan of this approach to the natural world. It has been blamed for “objectifying” nature for its human benefits On the other hand, it helps bring home human dependency as part of the planet’s ecosystems. Cash values can count in political priorities and win support for conservation.

This report’s authors, Daniel Norton, Stephen Hynes and John Boyd, seek out 126 of Ireland’s special areas of conservation that protect marine habitats around the island. Valuing their intricacies one by one, however, would have asked too much of any meta analysis. And there’s nothing to be gained, the authors point out, by totalling all their figures – there’s a lot more research to do.