I spotted this very exotic duck on the Dodder: readers’ nature notes and queries 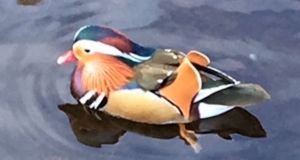 Mandarin duck: escaped from domestic collections and has been established on the Dodder for more than a decade.

I spotted this very exotic duck swimming beside the Dodder weir at Rathfarnham bridge. – Deirdre McHugh, Terenure, Dublin 6
The mandarin duck came originally from China. It escaped here from domestic collections and has been established on the Dodder for more than a decade.

Recently I watched a black-backed gull pull a dead fish out of the water and on to the bank of the Dodder at Sandymount. He was immediately challenged by a large rat and two magpies. The tense stand-off ended when a heron stalked over, speared the fish and flew away with it. – Rodney Devitt, Sandymount, Dublin 4

I spotted a stretch of Alexanders, Smyrnium olusatrum, along a footpath in Tymon Park, Tallaght, and all were infected with Alexanders’ rust, Puccinia smyrnii. Previous sightings of the infection were limited to Dublin coast and an island on the west coast. Is it unusual to find it inland? – Tony McGaley, Knocklyon, Dublin 16
As Alexanders are spreading inland, the rust is bound to follow them.

There are masses of frog spawn in the pond in Courtown Golf Club, and what appears to be a dead frog at the bottom of the pond. Do frogs expire after spawning? – Stephen O’Brien, Gorey, Co Wexford
Female frogs are sometimes killed during amplexus if they are gang-raped by several male frogs at the same time.

I took this photo of a yellowhammer in Co Meath last week. They are very scarce now and it was a welcome sight. – Liam Kane, Blanchardstown, Co Dublin
Yellowhammers are declining and confined now to the cereal-growing areas of the east and south.

Judge does not see reasonable prospect of south Dublin care facility surviving 17:17
Covid-19: Taoiseach says next two weeks are going to be critically important 17:12
Man (50s) killed in single vehicle crash in north Co Dublin 16:59
No plan for legislation to close meat plants in cases of Covid-19 outbreaks 16:57
Accused claimed ‘I know what it’s like to be a murderer’, trial told 16:08