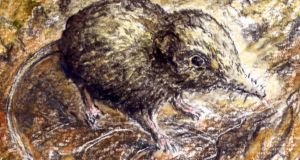 The pygmy shrew: A York University researcher was surprised to find that a small sample of our pygmy shrews shared a distinctive genetic lineage with those of Andorra. Drawing: Michael Viney

An acrobat’s agility, a cosy colour and the glorious comb-over of a tail help to make the red squirrel Ireland’s favourite rodent.

They support a popular belief that Sciurus vulgaris is a precious native creature, while the pox-ridden, bark-stripping American grey squirrel is an unspeakable alien.

Ireland’s mix of mammals is as sparse as on the coast of Norway, and what makes a species “native” is chiefly a matter of time – the centuries or millennia spent as part of our wildlife and its ecosystems.

Prof Ian Montgomery of Queen’s University regrets that more new mammals have arrived in Ireland by human agency over the past 100 years (mink, muntjac, coypu, bank vole, greater white-toothed shrew, dormouse, etc) than in the whole 10,000 years since the end of the Ice Age. It makes, he mourns, “an ecological junkyard” of the island.

Montgomery’s judgment fits a changed world of wrecked ecosystems and vanishing native species. But the successive human introductions of earlier ages, some by accident, found Ireland poorly furnished with wildlife after the scouring glaciers of the ice age. Bears and wolves found their own way back; hares and stoats found refuge south of the ice rim.

No one knows how long the red squirrel had been in Ireland before clearance of woodland and the trade in its fur extinguished the animal in the 17th century. No fossil bones have helped place it here between the ice ages or as a survivor of the last one.

The 19th century revived the trade in live red squirrels in the UK and there were multiple reintroductions to Ireland of animals from widely different lineages. In consequence, new research has found a remarkable genetic diversity between isolated and even neighbouring woodland colonies of Irish red squirrels.

Dr Denise O’Meara of UCC tempted them into sticky-lined tubes, baited with hazelnuts, to collect hairs for DNA analysis. With other squirrel material from across Ireland, she distinguished a range of genes between colonies “unique” in Europe.

The genes included distinctive molecular groups (haplotypes) probably now extinct in parts of Britain. This offers introductions of reinforcing genes to some of its threatened red squirrel populations. But their origins in isolated Irish colonies, too, risks extinction without protection of woodlands and hedgerows (online at http://iti.ms/2D01IJr).

The busy DNA research of recent decades has explored the post-glacial sources of Ireland’s mixed, if still meagre, bag of mammals. And in these studies, the smallest Irish mammal has come to stand for a major scientific uncertainty.

“The pygmy shrew syndrome”, as it’s known, deals with two main options for the source of colonising mammals in Ireland. Did they come from southwestern Europe –notably Iberia – or from Britain?

Now that temporary post-glacial land bridges across the Irish Sea are out of scientific fashion, the shrew is seen as a stowaway in the boats of early settlers.

In 2003, a researcher from York University, Silvia Mascheretti, was surprised to find that a small sample of our pygmy shrews shared a distinctive genetic lineage with those of Andorra, in the northern mountains of Spain. Their arrival in Ireland with early, perhaps Mesolithic, voyagers suggested, she thought, “an extreme founding event”.

Mascheretti’s work was received with some shock. An international genetic team led by Dr Allan McDevitt of UCD explored the “possible hypotheses” for the shrew’s post-glacial colonisation. Its study, published in Heredity in 2011, argued that the Andorran haplotype “most likely occurred in Britain also, from where the pygmy shrew colonised Ireland as a human introduction during the Holocene”.

As a non-molecular clincher, the team pointed out that tiny pygmy shrews have to keep eating insects, more or less nonstop, to stay alive. While slow long-distance journeys from Iberia weren’t impossible, a shrew’s chances of finding enough food to last the voyage in fodder in a Neolithic boatload of livestock brought from Britain seemed infinitely higher (online at http://iti.ms/2FUpB7Y).

McDevitt thought Britain had been neglected as a potential source of many of Ireland’s species. But the case for a post-glacial land bridge has been increasingly discounted by geologists, given the history and bottom contours of the Irish Sea. The otter is now credited with swimming the North Channel from Scotland to Northern Ireland unaided, though even a half-drowned land bridge would surely have been more tempting than a 23km swim.

As for the much-studied badger, a 12-strong team led by O’Meara with Dr Ceiridwen Edwards of TCD found Ireland with one genetic population, while Britain has several. Our badgers’ DNA shows signs of “an Atlantic fringe element which has been seen in other Irish species” and Iberia was, after all, a notable refuge in the ice age.

For the house mouse, on the other hand, the DNA points north. A major lineage, confined to the northern and western fringes of these islands, including Ireland, is also found in Norway. So blame the Vikings for mice, tucked away in their curly-prowed boats.