Storm Emma brought us the regular refugees from winter cold 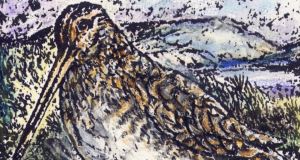 Snipe: two flew up from the marsh, their long bills numbed from prodding ice at night, to try the softer ground under David Cabot’s window across the lake. Illustration: Michael Viney

The trick was not to look them straight in the eye, with a glint like a predator, but to enjoy them with sidelong respect. Then they might stay longer, just beyond the window at my desk. I had squeezed it open to pour nuts along the snowy sill – anything not to wrap up to face the bitter wind from the hill.

Birds puff their feathers against the cold: outsize thrushes, portly blackbirds, rotund robins. The goldfinches seemed more careless of their warmth. Slim as ever and recklessly rocketing about, they looked freshly painted, brilliant against the snow.

I had hoped, of course, for something less familiar (siskins, redpolls would have done). But sparrows, tits and finches, and just one dunnock, made up the rest of the guests. No sign of a wren, not having insects to offer.

Wrens suffer badly in a freeze-up, sometimes piling into empty nest-boxes at night to share a ball of warmth. I hoped they had found refuge in the wood shed or beneath the snow-laden spread of the prostrate juniper, its darkness a tick or two warmer.

On the one sheltered acre of the hillside, I was looking out for redwings and fieldfares, the regular refugees from winter cold. There have been winters not long past when they poured forth from Europe ahead of the cold and, reaching our west coast, kept flying on into fatal exhaustion.

Birder Eric Dempsey has recalled, from the winters of 2009 and 2010, reports from Kerry of thousands of these thrushes flying out from headlands along the Kerry coast. That was when I found dead fieldfares found at the tideline, tangled in seaweed.

This month’s harsh wind and snow should have led to something similar, but the Irish Birding website recorded only modest redwing flocks of 100 or so, mostly in Co Cork. Thousands more, perhaps, did not get so far.

The extreme temperatures were enough to freeze wetlands hard and to bring lone, tired and misplaced birds to gardens where a lawn might have seemed more hospitable. Examples from readers have been a dunlin from Siberia, a redshank and a lapwing – each a wader separated from its flock.

Other desperate wetland refugees were single snipe, their long bills numbed from prodding ice at night. Two flew up from the marsh to try the softer ground under David Cabot’s window across the lake. And a water rail, normally so secretive among the reeds, stole up to try the oatflakes under his feeder. An ornithologist notices these things.

One snowy winter, a neighbour left his white car parked up the road with a window slightly open. He returned to find a snipe on the back seat, one leg broken, and brought the casualty to us. We splinted the leg with matchsticks and sticky tape, a sadly amateur resort, and kept it in the bedroom for days, away from the cats, where it pecked at seeds in its box of hay.

It can’t have ended well, or I’d remember.

The ocean, on the other hand, can offer up its corpses in astonishing numbers when a freezing storm such as Emma hits its inshore communities.

On Britain’s North Sea coast, from Yorkshire to the English Channel, some beaches were piled ankle deep with great carpets of dead creatures – thousands of starfish, crabs, anemones, mussels, even berried lobsters and rock fish.

The Yorkshire Wildlife Trust blamed a sudden temperature drop of 3 degrees, which stilled the energies of seabed invertebrates. Then the east wind raised the waves to wash them ashore. Trust members went out to gather hundreds of lobsters in buckets and keep them in tanks for release into calmer seas.

In the Irish Sea, too, the onshore storm littered beaches with casualties. At Sandyford on Dublin Bay, curled octopus (the common species of our coasts) joined other bottom-living creatures strewn at the tideline, little squat lobsters and starfish among them. Further north at Malahide there were more rock-fish, among them ling and wrasse.

Years ago, a bad storm from the west left the Thallabawn strand widely littered with cast-up fish, their fins snapped forward in some exceptional underwater maelstrom. We went down with big bags to gather fish for the freezer: pollack, whiting, ling and more, all perfectly fresh and edible.

Temperature matters to marine life at every level in the sea. It governs the lives of fish in cycles linked to the north Atlantic’s great atmospheric oscillations. But the blast from Siberia was not part of any cycle, just the climate chaos that has warmed the Arctic, turning Europe’s weather upside down.