Dublin taxi drivers face new restrictions to College Green during the morning rush hour, these restrictions could become permanent if An Bord Pleanán and Dublin City Council move forward for plans to a traffic-free civic plaza at College Green. 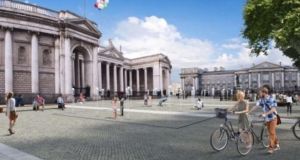 Dublin City Council has planned a pedestrian and cycle plaza and ban all traffic, including buses and taxis, from accessing Dame Street through College Green

The proposed €10 million civic plaza planned for Dublin’s College Green would be “fatally” compromised if traffic was allowed to cross to and from Dame Street, Dublin City Architect Ali Grehan has told An Bord Pleanála.

A planning hearing on Dublin City Council’s proposal to build the pedestrian and cycle plaza and ban all traffic, including buses and taxis, from accessing Dame Street through College Green, began on Monday.

Several submissions have been made to An Bord Pleanála seeking to retain traffic in the plaza, particularly buses and taxis, and reduce the size of the pedestrianised area.

Allowing traffic to continue travelling to and from Dame Street would “not result in a functional civic space of any significance, only greater or lesser degrees of footpath widening” Ms Grehan said.

The central water feature of 32 mini-fountains would be bisected, and would likely have to be omitted entirely if a traffic lane was retained, and space for civic events would be “severely curtailed” she said.

“The tens of thousands of pedestrians who currently use College Green will continue as they are now to be corralled between traffic lanes to the east, west and south and subjected to traffic noise and fumes,” she said.

“Retention of a carriageway through College Green will fatally compromise Dublin City Council’s proposal to create a Landmark Civic Plaza at College Green.”

Paul Keogh, the architect heading the design team for the plaza said it would be “culturally irresponsible” not to remove traffic from the plaza. Not only would the water feature be compromised but events such as “winter ice-skating” and “summer beach parties” would be prohibited he said.

Submissions had been made by a number of disability organisations raising concerns about the risks cyclists would pose to pedestrians. Mr Keogh said cyclists would be restricted to designated paths on the perimeters of the plaza and these areas would be clearly demarcated. “Cycling will not be accommodated through the pedestrian zone outside the segregated cycling route.”

The hearing was adjourned early yesterday after one of the parties said documentation was not being provided in a format he could read. Robert Sinnott, who has a visual impairment told the board’s inspector Breda Gannon that the hearing was “a mess”, that he was being treated in a disrespectful manner and his rights to information were being ignored.

Ms Gannon adjourned the hearing until 9.30am on Tuesday to allow the board to consider its legal position in relation to the disability acts.

Earlier yesterday Independent councillor Mannix Flynn asked that the hearing be postponed for at least one week because documents, which are part of the planning file for the project, were not made available to him to view at the Dublin city civic offices at Wood Quay.

Ms Gannon refused his request. Mr Flynn said he will decide on Tuesday morning whether to seek a High Court injunction to stop the hearing.

The hearing is due to continue until Friday in the Gresham Hotel. Submissions are expected from the National Transport Authority, Transport Infrastructure Ireland, Dublin Bus, and a large number of city businesses. Politicians, including Mr Flynn, Green Party councillor Ciarán Cuffe and Social Democrats TD Róisín Shortall, are also expected to address the hearing.

A group of around 40 taxi drivers held a protest outside the hearing. A ban on taxis travelling south through College Green during the morning peak hours came into force on Monday morning.