Clontarf wall: what exactly can you see from a moving car?

Dublin city councillors have voted to spend €500,000 to lower and reface part of the recently built flood defence sea wall in Clontarf. The council warned if the wall was not lowered motorists would have restricted views of the sea. 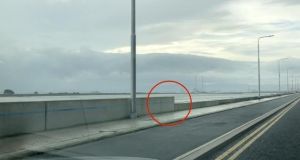 Part of the Clontarf flood defence wall will be lowered at a cost of €500,000

Work on lowering the Clontarf sea wall in Dublin is to begin at the start of April, Dublin City Council has said.

A spokeswoman said the work to lower and reface part of the recently built flood defence sea wall was expected to take approximately six months to complete.

Dublin City councillors voted earlier in January to spend €500,000 to carry out the work despite being warned it will have to be rebuilt in the future.

The wall (see map) was built as part of the €5 million Clontarf cycle path which opened last May following two years of construction.

After a lengthy dispute with local residents, the council agreed to reduce the height of the wall by up to 30cm along almost half a kilometre opposite St Anne’s Park.

The wall does not obscure the views of Dublin Bay for pedestrians and cyclists using the new path, and the section being reduced is not opposite any houses. However, the council warned if the wall was not lowered motorists would have restricted views of the sea.

Before the work begins we decided to send a video team to the area to record the views from a moving car to guage the extent of the problem. In the videos here you can see where the lower portion of the wall ends and the higher portion begins.

A blue line on the higher portion shows the amount the wall will be lowered by. Use the 360 video in this article to look around the area as our camera car passes by.

If you are viewing this on The Irish Times app, go here.