Study finds microwaves may be frying up the environment 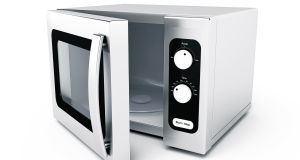 Microwaves account for the largest percentage of sales of all types of ovens in the EU, with numbers set to reach nearly 135 million by 2020. Photograph: iStock

Microwave ovens are responsible for the emission of as much carbon dioxide in the EU annually as nearly seven million cars, according to a new study.

Microwaves account for the largest percentage of sales of all types of ovens in the EU, with numbers set to reach nearly 135 million by 2020.

The University of Manchester carried out the study, the first major examination of their environmental impact.

It found that while microwaves are idle 90 per cent of the time, they use 573 kilowatt hours (kWh) of electricity over an eight-year lifespan. This is equivalent to the electricity consumed by a 7-watt LED lightbulb left on continuously for almost nine years.

The researchers found microwaves are responsible for the release of 7.7 million tonnes of carbon dioxide into the air every year in the EU, which is roughly equivalent to 6.8 million cars.

The study assessed the use of microwaves from the “cradle to the grave” and examined 12 different environmental factors, including climate change, depletion of natural resources and ecological toxicity.

Due to their relative low cost and ease of manufacture, consumers are also throwing away more electrical and electronic equipment – including microwaves – than ever before.

“Consumers now tend to buy new appliances before the existing ones reach the end of their useful life, as electronic goods have become fashionable and a ‘status’ item,” said Dr Alejandro Gallego Schmid, one of the report’s authors.

They also have a much shorter lifespan than previously. The research shows a microwave’s life cycle has decreased from 10 to 15 years in the late 1990s to six to eight years today.

The study’s authors suggest efforts to reduce consumption should focus on improving consumer awareness and behaviour. For example, electricity consumption by microwaves can be reduced by adjusting the time of cooking to the type of food.