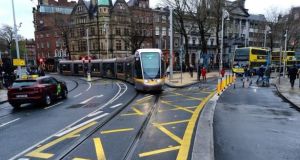 A spokesman for Irish Guide Dogs said the new crossings at College Green are an example of ‘how people who are blind or vision-impaired have yet again been forgotten’. Photograph: Cyril Byrne

Irish Guide Dogs has called for “immediate action” to address the new layout of pedestrian crossings at Dublin’s College Green which it says presents possible dangers for visually impaired people.

Crossings at the busy city centre junction were reconfigured last year as part of works to facilitate the new Luas Cross City tracks.

As a result, the pedestrian crossing between Trinity College and the pathway on the south side of Dame Street is now bisected by tram tracks, a cycle lane and general traffic.

Speaking to The Irish Times earlier this month Dublin City Council chief executive Owen Keegan admitted that pedestrian priority had been reduced at the junction to accommodate the new design.

People must now wait three times longer to cross the road at College Green and surrounding junctions, a situation that will be exacerbated by the introduction of longer Luas trams to the cross city route from March.

“The introduction of the new crossings at College Green are another example of how people who are blind or vision-impaired have yet again been forgotten in the design,” said Irish Guide Dogs spokesman David McCarthy.

He continued: “We are seeing that this is putting our clients at higher risk due to non-specified pedestrian pathways, a lack of kerbing and poor tactile markings.

“At a very practical level, it takes a person with a vision impairment longer to cross a junction. If they are not being afforded this time there is a potential for dangerous situations to arise as they are now expected to cross over five lanes with moving traffic.”

Representatives of the charity are due to hold a briefing session with city councillors to outline their concerns over the reconfiguration. The organisation also plans to make a submission to An Bord Pleanála over the proposed pedestrianisation of College Green.

However, it has said “immediate action” must be taken to correct the current road-crossing situation at College Green in order to protect the safety of visually impaired pedestrians.

Dublin City Council announced earlier this month that it will enforce new traffic restrictions in the area after a Bord Pleanála public hearing over plans for the College Green civic plaza was shelved at short notice.

The authority could potentially issue a complete ban on taxis and cars accessing Nassau Street from College Green, and buses can be stopped from using a lane that is shared with the new southbound Luas line in front of Trinity College.