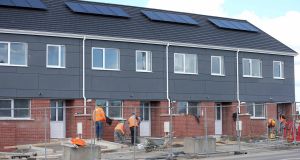 Almost 900 “rapid-build” homes, 70 per cent of which will be apartments, are planned by Dublin City Council for vacant sites across the city .

Up to now rapid-build housing has been used to house homeless families living in hotels, but the new homes at 19 locations will be used for applicants living in general social housing as well as homeless people.

Only 22 rapid-build homes have been delivered by the council, at Poppintree in Ballymun, since the scheme was announced in late 2015 to address the homelessness crisis.

Another 130 under construction at four sites across the city were originally to be ready in June of last year. They are now expected to be finished by next month.

The smaller of the two sites, a vacant plot on Fishamble Street near Christ Church Cathedral, will have four to eight apartments at a cost of €1.5 million to €1.8 million. This will be used to accommodate homeless families living in emergency accommodation.

The second site, a €13.5 million scheme of 60 apartments at Bunratty Road in Coolock, will be used to accommodate people on the council’s general housing waiting list. Both projects are due to be completed by the end of next year.

The 130 homes currently under construction at sites in Finglas, Drimnagh, Darndale and Cherry Orchard are all two-storey houses. The council last November announced another 70 houses are to be built under the rapid-build programme at three sites in the city.

Two of these will be in Finglas, at Woodbank Drive – where four houses will be built – and at Rathvilly Park, which will have 13. Another 53 houses will be built on Health Service Executive lands in Ballyfermot. The council will shortly award tenders for these three developments.

However, the council said most of the 630 homes in “phase two” of its rapid-build programme would be apartments.

“Phase two will have an emphasis on ‘volumetric’ rapid build which will maximise the potential of sites and increase the number of social housing units delivered,” it said.

The 10 sites chosen are more suited to “higher-density” development of “multiunit buildings”, the council said.

The largest site, at St Helena’s Road in Finglas, close to the modular housing already under construction, will have 100 “starter homes” in addition to 50 social housing apartments.

A site at Springvale in Chapelizod has been designated for 81 units; and sites at Grand Canal Harbour and Darndale will have 80 each.

1 Coronavirus: One more death in Republic as expert warns house parties are ‘disaster’ for containment
2 ‘Frustrated and angry’: Thousands march in Dublin to protest death of George Floyd
3 Diver (35) suffers spinal injuries after hitting rocks in Co Cork
4 Schools may reopen in July for children with special needs
5 Six counties free of new cases of Covid-19 over past week
Real news has value SUBSCRIBE