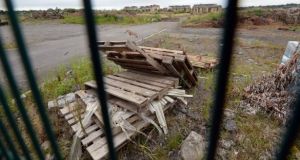 To be hit with a levy, sites must be bigger than 0.05 of a hectare, be ‘idle’ for more than 12 months, be zoned for residential or regeneration purposes, and be in an area in need of housing. Photograph: Eric Luke

The register, which allows local authorities to impose a levy on property owners who fail to develop prime housing land, came into force on January 1st. The levy, which is set at 3 per cent of the value of the land, will be charged on vacant sites from 2018 but is not payable until 2019.

Dublin City Council, the State’s largest local authority, petitioned the Government in 2013 to introduce a levy to stop landowners from “mothballing” sites, a practice the council said was holding back the development of the city

The city council has to date published details of 86 sites on its register. South Dublin County Council has listed eight sites, six of which are in the Clondalkin area.

Fingal has recently published details of eight sites, all of which are privately owned. Half of the sites are owned by two companies registered at the same address in Tyrrelstown Town Centre; Hasak Ltd and Bardus Ltd, and refer to sites in the Tyrrelstown and Hollystown area.

Two sites are in Balbriggan and are owned by separate individuals and there is one site in Portmarnock. The only site described as being occupied by any structures, is the former Campions pub on the Malahide Road at Balgriffin.

To be hit with the 3 per cent levy, the vacant sites must be bigger than 0.05 of a hectare, excluding gardens. The majority of the site must be “vacant or idle” for more than 12 months, be zoned for residential or regeneration purposes and be in an area in need of housing.

Dún Laoghaire-Rathdown county council has yet to publish details of any sites a year after the register came into force. The council has said it notified “the purported owner(s) of a first tranche of sites” and had received submissions in relation to these sites, which it was currently assessing. “A decision on whether or not to formally enter all or some of these sites on to the Vacant Sites Register is imminent.” The council said it was also preparing documents in relation to a “second tranche of sites”.