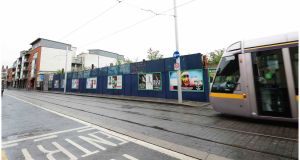 The vacant site owned by the Law Society of Ireland on Benburb Street in Dublin. Photograph: Bryan O’Brien

Two Dublin local authorities have failed to list any properties on the register of vacant sites that was set up a year ago to stop the hoarding of land that could be used for housing.

The register, which allows local authorities to impose a levy on property owners who fail to develop prime housing land, came into force on January 1st. The levy, which is set at 3 per cent of the value of the land, will be charged on vacant sites from 2018 but is not payable until 2019.

Nationally the owners of 30 properties have so far appealed their inclusion on the register to An Bord Pleanála. The planning body has made determinations in relation to 12 of these sites and decided all 12, including properties owned by the Health Service Executive and the Law Society of Ireland, qualify for the levy.

Dublin City Council, the State’s largest local authority, petitioned the Government in 2013 to introduce a levy to stop landowners from “mothballing” sites, a practice the council said was holding back the development of the city

The city council has to date published details of 86 sites on its register. South Dublin County Council has listed eight sites, six of which are in the Clondalkin area. However, Fingal and Dún Laoghaire-Rathdown county councils have yet to publish details of any sites a year after the register came into force.

To be hit with the levy, which is set at 3 per cent of the value of the site, the vacant sites must be bigger than 0.05 of a hectare, excluding gardens. The majority of the site must be “vacant or idle” for more than 12 months, be zoned for residential or regeneration purposes and be in an area in need of housing.

Dún Laoghaire-Rathdown said it had notified “the purported owner(s) of a first tranche of sites” and had received submissions in relation to these sites, which it was currently assessing. “A decision on whether or not to formally enter all or some of these sites on to the Vacant Sites Register is imminent.” The council said it was also preparing documents in relation to a “second tranche of sites”.

The owners of 30 sites have appealed to the board, and 12 have had their appeals rejected.

One of these sites, a terrace of five late-Victorian houses at Grangegorman in Dublin, is owned by the HSE, which said it intended to develop the property but there were unavoidable delays because of the “dangerous condition” of the buildings.

It said its design team had been in contact with the Dublin City Council in relation to this issue.

However, the council told the board, “The owners’ statement that further discussion has taken place with the council has not been supported with further information”. It added that no construction had taken place on the site since it had first inspected it in May 2016.

The Law Society of Ireland also appealed the inclusion of its vacant site on Benburb Street to An Bord Pleanála. The council initially decided not to include the site, next to the Luas Red Line, on the register because the society had maintained it intended to integrate it into its Blackhall Place campus.

The society said it intends to develop the site “in the next three to four years”.

However, the council told the board it had received no planning application for the site, which was having a “negative effect on the character of the area”.

Fingal and Dún Laoghaire Rathdown councils are two of 15 local authorities nationwide (including city councils in Cork and Limerick) to have posted empty lists of vacant properties on their websites.

A further 10 councils, including Galway City Council, have published nothing at all online.

Wexford is the only council outside Dublin to register any activity over recent months after it added three properties to its register in June.

Donegal (four properties) and Waterford (21 properties) are the only other counties that have lists populated so far. Appeals against seven vacant site listings on the Waterford register, including the site of the former Waterford Crystal factory in Kilbarry, are due to be decided shortly.

Fearghal Reidy, assistant chief executive of research of the Local Government Management Agency, said he expected that a raft of new entries would be made to lists around the country from the end of January.

“While some local authorities have already listed sites on their vacant site registers, it would be anticipated that more information will be provided on the registers in [the first quarter] of 2018, ie following 12 months from January 2017 plus the 28 days required for notice to landowners.

“Local authorities are taking this matter extremely seriously, and recognise the importance of due diligence in its implementation,” he said.