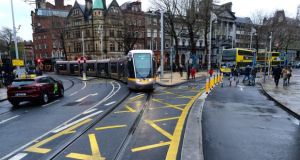 Councillor Ciarán Cuffe tabled a motion calling on Owen Keegan and his staff to ‘manage city centre traffic’ in a way that ‘safely supports‘ transport needs ‘ in a sustainable manner’. Photograph: Cyril Byrne

An Bord Pleanála had been due to hold a public hearing on Tuesday, on the council’s plans for the plaza, which would see all traffic, including buses and taxis, banned from accessing Dame Street through College Green.

However, the board notified parties last Thursday that the hearing would not proceed and it does not yet know when it will be rescheduled.

Mr Keegan said the city cannot wait for an indefinite period for a new hearing date and the traffic problem in College Green must be addressed.The restrictions may involve an end to buses using the Luas Cross City line, and could see taxis and cars entirely prohibited from the area.

Independent councillor Nial Ring has put forward an emergency motion calling on Mr Keegan to wait for the board to reschedule the hearing so the council “cannot be accused of pre-empting a decision or overriding the authority and/or the independence of An Bord Pleanála in its deliberations on the application”.

However, Green Party councillor Ciarán Cuffe, who chairs the council’s transport committee, put forward a counter motion calling on Mr Keegan and his staff to “manage city centre traffic” in a way that “safely supports the transport needs of residents, workers, retailers and visitors to the city in a sustainable manner”.