Some 50% more food will be needed by 2050, ‘but greenhouse gas emissions from agriculture will have to fall by two-thirds at the same time’ 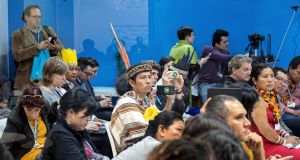 People living in wealthy countries, including Ireland, will have to make big reductions in the amount of beef and lamb they consume if the world is to be able to feed 10 billion people, according to a World Resources Institute (WRI) report issued at the UN climate summit.

These cuts, combined with a series of other measures, are also needed to prevent catastrophic climate change in coming decades, it concludes.

More than 50 per cent more food will be needed by 2050, the WRI notes, “but greenhouse gas emissions from agriculture will have to fall by two-thirds at the same time”.

The extra food will have to be produced without creating new farmland, it says, otherwise the world’s remaining forests face destruction. Meat and dairy production use 83 per cent of farmland, and produce 60 per cent of agriculture’s emissions.

Increasing the amount of food produced per hectare was the most critical step, followed by cutting meat-eating and putting a stop to the wasting of one-third of food produced, it suggests.

“We have to change how we produce and consume food, not just for environmental reasons, but because this is an existential issue for humans,” said Janet Ranganathan, WRI vice-president for science and research.

Speaking in Katowice, Poland, which is hosting the summit, Dr Tim Searchinger of the WRI and Princeton University said: “If we tried to produce all the food needed in 2050 using today’s production systems the world would have to convert most of its remaining forest, and agriculture alone would produce almost twice the emissions allowable from all human activities.”

With a recent UN report setting out the need for the global economy to go “net-zero” on carbon emissions by 2050 to limit warming to 1.5 degrees, “the potential for natural solutions are much better than the science fiction of geoengineering”, a separate report by Christian Aid concludes.

Report author Dr Kat Kramer, Christian Aid’s global climate lead, said: “The move to a net zero world by 2050 is gaining momentum as we realise how vital it is to limit global warming to 1.5 degrees.”

The search for ways to create “carbon sinks” that generate negative emissions was growing, he said at briefing at COP24, the informal name of the climate conference. “The idea of putting mirrors in space or spraying the atmosphere with reflective aerosols gets attention but these are largely expensive science fiction fantasies.

“What we need is a renewed relationship with nature. Restoring ecosystems, especially peatlands and native forests, has the potential to create significant benefits for the climate without using our atmosphere as a school laboratory.”

Commenting at a forum on socially just climate policy on the “yellow vest” protests in France, called to oppose a planned carbon tax which the French government has now scrapped, Pierre Cannet of World Wide Fund for Nature (France) said there was no alternative to increasing the price of carbon.

“This is about figuring out how to build a transition in an inclusive manner. There’s no viable solution to reducing emissions on the scale needed in France without an increased price on carbon, so ultimately this needs to be reinstated.”

He said France now had an opportunity to get it right by bringing people into the discussion. “A more inclusive process can lead to a stronger price signal with social measures to ensure a just transition.”

Dr Arunabha Ghosh, chief executive of the Council on Energy, Environment and Water, said it was becoming increasingly clear that equity needed to be embedded in climate policies.

“Consumers and citizens need to understand what a carbon tax is used for and feel how they benefit from it. Any delay in the transfer of benefits breeds mistrust in the system, and hinders the urgently-needed emissions reductions.”

The British Columbia carbon tax has been one of the single most effective policies to date to reduce emissions, said Tzeporah Berman of environmental grassroots organisation Stand.Earth. “Critical to its success was a system to return revenues to citizens according to need and a continued ramp up of the price.”

Camilla Born, senior policy adviser with E3G environmental consultancy, said: “Where the French policy fell down was in its failure to take people along with them, to accompany the policy with the social measures that allow citizens to embrace the opportunities of the transition and ride out the challenges of change.” – Additional reporting: Guardian