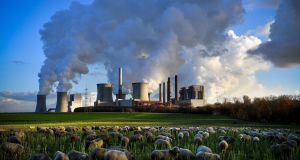 “Any world leaders who thought they could hit the snooze button have been given a final wake-up call.” Photograph: Sascha Steinbach/EPA

Increasing coal, oil and gas use are pushing global carbon emissions to an all-time high, climate scientists have told the UN climate talks in Katowice, Poland.

A projected rise in global emissions of more than 2 per cent has been driven by “a solid growth in coal use for the second year in a row, and sustained growth in oil and gas use”, according to the Global Carbon Project and researchers at the University of East Anglia.

In spite of this, energy trends are changing and “there is still time to address climate change if efforts to curb emissions rapidly expand in all sectors of the world economy”, the researchers confirm.

The new data indicate global emissions from burning fossil fuels are expected to reach 37.1 billion tons of CO2 for 2018. Emissions have now risen for a second year, after three years of little-to-no growth from 2014 to 2016. The rise this year is projected to be 2.7 per cent.

The 10 biggest emitters are China, the US, India, Russia, Japan, Germany, Iran, Saudi Arabia, South Korea, and Canada. The EU as a whole region of countries ranks third.

Lead researcher Prof Corinne Le Quéré, director of the Tyndall Centre for Climate Change Research at the University of East Anglia, said: “Emissions need to peak and rapidly decrease to address climate change. With this year’s growth in emissions, it looks like the peak is not yet in sight.”

“To limit global warming to the Paris Agreement goal of 1.5 degrees, CO2 emissions would need to decline by 50 per cent by 2030 and reach net zero by around 2050. We are a long way from this and much more needs to be done, because if countries stick to the commitments they have already made, we are on track to see 3 degrees.”

“The California wildfires are just a snapshot of the growing impacts we face if we don’t drive emissions down rapidly,”she added.

Coal use may soon exceed its 2013 peak if current growth continues. Oil use is growing strongly in most regions, with a rise in emissions from cars and lorries. Flights have also contributed to the oil rise. Gas use has grown almost unabated in recent years.

“Energy trends are changing rapidly, with coal use decreasing in many parts of the world and still below its 2013 level globally, and an explosion in wind and solar energy. But while renewables are rising fast, it is not yet enough to reverse global emissions trends.”

The extent of the 2018 increase reveals how far the world is from taking climate change seriously, said Mohamed Adow, climate lead of Christian Aid International. “Any world leaders who thought they could hit the snooze button following the Intergovernmental Panel on Climate Change report in October have been given a final wake-up call.”

Meanwhile, Clodagh Daly of Friends of the Irish Environment outlined details at the summit of the legal challenge being brought by Climate Case Ireland against the Irish Government, based on its duty “to protect us from harm by complying with its legal obligations, including human rights law and constitutional law”. The case is due to be heard in January.

At a press conference highlighting court actions being pursued to force states to deliver on emission commitments, she said the challenge was to the Government’s approval of its National Mitigation Plan, on the basis that “the decision was inconsistent with Ireland’s national, EU and international obligations”.

She cited Climate Change Advisory Council criticism of the plan; that it does not put Ireland on a pathway to a low-carbon transition.

The Republic had the third-highest level of carbon emissions per capita in Europe, Ms Duffy said, while the Government was failing to even come close to meeting inadequate EU targets. It had repeatedly agreed developed countries such as Ireland must do their fair share in leading the way to a low-carbon economy by reducing emissions.

But the EPA had predicted Ireland’s emissions would actually increase by 11-12 per cent over the period 1990-2030. “We believe that actions speak louder than words. Ireland may be a small country, but we contribute disproportionately to climate change, and our government is putting lives at risk.”

Bold, transformative policies were needed across all sectors of the economy, Ms Daly said. “We cannot hide behind other countries’ emissions, we need to take action right now. The oceans are rising, and so are we.”

Tackling climate change would save at least a million lives a year, making it a moral imperative, the World Health Organisation told the summit. Cutting fossil fuels not only slows global warming but slashes air pollution, which causes millions of early deaths a year, notably in India and China, “which are plagued by toxic air”.

“The global public health community is getting very impatient,” said María Neira, WHO director of public and environmental health. “If you don’t think you need to take action for the sake of climate change, make sure when you think about the planet, you incorporate a couple of lungs, a brain and a heart. It is not just about saving the planet in the future, it is about protecting the health of the people right now.” – Additional reporting Guardian