Passenger numbers are up but problems, particularly at College Green, persist 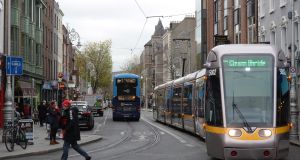 With delays, overcrowding, yellow box blockages, troubles with longer trams, and College Green “chaos”, the Luas Cross City line, introduced a year ago, did not exactly get off to a smooth start.

However, the popularity of the new service is undeniable. Trips on the Luas system as a whole exceeded 10 million for the first time in the second quarter of the year.

Filling in the “missing link” between the Luas Red and Green Lines through the heart of a congested city centre was never going to be easy, or it would have been done more than a decade ago when those two lines were built.

There should, of course, never have been two separate lines in the first place. This was apparent from the start of Luas operations in 2004, if not before, as evidenced by the fact that plans to connect the lines were announced the very next year. It was another five years, however, before an application was made to build the connecting line.

The Cross City line – which is in fact an extension of the Green Line, and runs on from the original Green Line terminus at St Stephen’s Green, through College Green and O’Connell Street, where it meets the Red Line, and on to the new DIT campus at Grangegorman, serving Phibsborough and finally Cabra – was granted permission in 2012. Work on the line started the following year and ended on schedule last December.

While the trams arrived on time, the surrounding city clearly wasn’t ready for them. This was most obvious at College Green. In 2009 Dublin City Council tried and failed to remove all but public transport from College Green, which in 2010 was watered down to a peak-time-only car ban. Only in mid-2014, when Luas construction work made the area practically impassable, was the ban extended to 7am-7pm on weekdays.

In September 2015 the council said the College Green traffic changes needed to be agreed “urgently” to be in place ahead of the start of operations of the Luas, but it wasn’t until May 2017 that it submitted its plan to remove traffic from College Green, with the construction of a civic plaza, to An Bord Pleanála. The board recently rejected the plan. The council intends to have another go next year, but said that in the meantime there was an “urgent need” to introduce traffic-management measures to deal with increased numbers of pedestrians and cyclists “and the new requirement to cater for 55m-long Luas Cross City trams”. Leaving aside the council’s understanding of the word “urgent”, failure to put measures in place to deal with the traffic conflicts in College Green meant that trouble was inevitable when the trams started trundling through last December.

On the first weekday of operations as many as six trams were lined up from O’Connell Street to College Green, unable to move, while buses took up to 22 minutes to cover 200m from Pearse Street Garda station to the front gate of Trinity College Dublin.

Initially tram operator Transdev reduced the frequency at peak times to try and take heat out of the situation, with the predictable consequence of overcrowded carriages. The following month, 17 bus routes were diverted away from College Green, and another 10 routes followed in February.

College Green was not the only hostile environment for the new trams. While the services started with 43m-long trams, 55m trams were introduced in February, which presented a potential problem crossing the 45m-long O’Connell Bridge. The solution was to use yellow boxes, which motorists, again predictably, blocked at one end, forcing trams to block the quays with their back-ends.

While all this has the distinct whiff of fiasco off it, Paolo Carbone, head of public transport capital programmes with Transport Infrastructure Ireland said the introduction of the Luas has not been more problematic than similar systems in other countries.

“The Luas is not segregated in the city centre. It shares the road with other users – buses, cars, taxis, delivery vans. Inevitably there will be some traffic problems, but when you travel through the city, these things happen.”

Difficulties at O’Connell Bridge have been rare, he says, and have largely been down to motorists trying to take an illegal turn from the bridge on to Eden Quay.

Having worked on similar systems in other cities, including Vienna and Budapest, Carbone says: “I haven’t seen anything I wouldn’t have expected.”

Victim of its own success

The popularity illustrated by the passenger numbers has brought strains, Carbone concedes. “So far the usage has bucked every projection, so at times it can be uncomfortable, but this is exactly why we have introduced the capacity enhancement programme.”

This means the introduction of extra longer trams. Seven 55m trams were brought into service between January and June this year, 26 existing 43m trams will be ungraded to the longer length and eight additional 55m trams will be in place by 2022, he said.

“At the moment 6,400 passengers can currently travel from Sandyford to St Stephen’s Green in the morning. This will increase to 8,200 after the expansion in capacity with a very generous factor of comfort.”

Graeme McQueen of the Dublin Chamber of Commerce says the service has “broadly been a great addition to the city” but issues excused as teething problems at the start “have not all gone away”, he said.

“If there is one thing we really would like to see it’s more enforcement of yellow boxes. This is probably down to Garda enforcement, but it is a perennial problem of trying to get everything working together in the city, and for that to be solved the College Green area needs to be addressed.”

The Luas line, and College Green in particular, has posed a particular problem for cyclists. While evidence is anecdotal, hospital staff have reported increased injuries involving the tracks.

Kieran Ryan of the Dublin Cycling Campaign says there has been a “steady stream” of reports of falls, particularly at College Green, where cyclists have in some cases to travel with the tracks , and in others cross them, in an area that is very tight for space.

“Even experienced cyclists are falling in College Green, and a lot of it is to do with the pressure of traffic there. Research [in Scotland] has shown that 40-50 per cent of falls involve people looking over their shoulders instead of looking at the tracks ahead.”

The National Transport Authority (NTA) had initially sought to ban cyclists from parts of the city centre used by the tram, but was blocked from doing so by the city council.

“The NTA said instead of the ban they would prioritise alternative routes for cyclists through the city. We thought Suffolk Street would be ideal for that, but that has been blocked off and has become an informal loading bay, which is a real missed opportunity.”

The NTA has “no immediate plans for any major re-routing of cyclists in the College Green area”. There may be ways to improve the effectiveness of the current two-way cycle route that runs in front of the Bank of Ireland, it said, but a lot will depend on the revised proposal for the plaza.

The Luas, while undeniably popular, is seen by some, particularly those reliant on buses, as getting too much precedence and priority, and was even accused in the Oireachtas of ruining Christmas this year, with the council cancelling the traditional Christmas tree ceremony at the GPO on O’Connell Street so as not to disrupt its services.

Operational issues will never fully be eliminated. The recent breakdown of a bus on the tracks on Dawson Street early one weekday morning brought the service to a standstill during rush hour. Ultimately, securing reliability for the service in the city will come down to the resolution of the College Green mess.