Temperatures were above average in most places across State in November 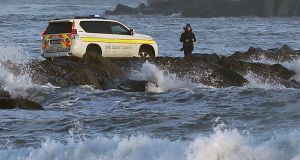 The Coast Guard came to the assistance of a walker during high winds and swells on Dublin’s great south wall as the tail end of Storm Diana crossed the East Coast on November 27th. Photograph: Niall Carson/PA

Temperatures were above average in most places last month, according to Met Éireann’s latest weather reports.

The month’s highest temperature of 16.3 degrees was reported at Shannon Airport on November 3rd, its highest November temperature since 2007.

The lowest temperature for the month was recorded on November 2nd at Mount Dillon, Co Roscommon where a temperature of minus five degrees was reported.

Rainfall totals were also above average at the majority of weather stations, ranging from 86.3mm at Athenry, Co Galway to 253.4mm at Valentia Observatory, Co Kerry.

The month’s wettest day was also recorded at Valentia Observatory with 34.1mm reported on November 27th. The number of rain days ranged from 19 days at Finner, Co Donegal to 28 days at Cork Airport.

All weather stations reported ground frost during November and more than half recorded air frost.

Sunshine values were “variable” across the country last month, according to Met Éireann. Monthly sunshine totals were as much as 85.2 hours at Belmullet, Co Mayo. The highest number of daily sunshine hours recorded was 8.7 hours at Casement Aerodrome, Co Dublin on November 1st.

The number of dull days ranged from five days at Belmullet to 16 days at Cork Airport.

Both Casement Aerodrome and Roche’s Point, Co Cork recorded a gust of 115km/h on November 28th, also due to Storm Diana. Met Éireann said this was the highest November gust recorded at Casement for 27 years and at Roche’s Point for 13 years.

“After a chilly start, much of the first three weeks of November were relatively mild,” the forecaster’s November report said.

“From the 27th to the end of the month, the Atlantic influence returned with a succession of weather fronts and active low pressure systems, including Storm Diana on the 28th, traversing the country bringing heavy rain or showers and gales at times.”

In its Autumn weather report, Met Éireann said nearly all temperatures were below average for the season. The national meteorological service said this was attributed to September and October, as November had above average temperatures in most places.

Mean temperatures for the season ranged from 8.7 degrees at Knock Airport to 11.5 degrees at Sherkin Island, Co Cork. The season’s highest temperature (25.1 degrees) was recorded at the Phoenix Park in Dublin on September 2nd.

Seasonal rainfall totals across the country were below average, ranging from 181.7mm at Ballyhaise, Co Cavan to 486.9mm at Valentia Observatory.