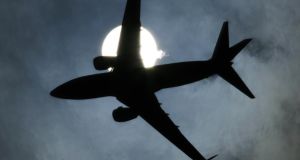 A return trip from Europe to Australia generates about 4.5 tonnes of carbon. Photograph: Tim Shaffer/Reuters

International aviation carbon emission could grow seven-fold over the next 30 years despite climate change concerns, according to International Civil Aviation Organisation (ICAO) figures .

Aviation, particularly the role played by frequent fliers, is rarely mentioned in the climate debate, yet air travellers, particularly those flying business class, are among the world’s worst carbon polluters.

Global aviation emissions will be 70 per cent higher in 2020 than they were in 2005, according to the European Commission, while the ICAO forecasts that by 2050 emissions could have grown by between 300 per cent and 700 per cent.

Until recently, aviation had not been central to the climate change debate. Enjoying special status, aviation and shipping were excluded from the landmark Kyoto and Paris climate-change agreements.

Urged to produce its own solutions, the ICAO introduced a global scheme in 2016, after much foot-dragging. So far, however, it has had limited success.

The European Union has introduced a more robust system under its emissions trading scheme. So airlines that fly to, from or within EU countries must buy carbon credits to offset emissions.

Modern aircraft are 70 per cent more fuel-efficient than 40 years ago, while airlines with the highest load factors produce significantly less emissions per passenger than less successful ones.

Aviation consumes five million barrels of oil every day, contributing about 2.5 per cent of global emissions. Some climatologists, however, argue its real impact is much higher.

Calculating its exact impact is complex as greenhouse gases are released into the upper atmosphere, but the same gases have different effects when emitted at ground level.

However, some basic numbers are not in doubt: a return trip from Europe to Australia generates about 4.5 tonnes of carbon. A car driving for 2,000km emits less than that.

Airlines are increasingly seeking solutions. Airbus, Boeing and Embraer are working together on new affordable bio-fuels. However, the electric aircraft is years away.

Offsetting helps, but only partially. A recent study by the European Commission found that 85 per cent of offset projects it had evaluated had failed to reduce emissions.

Aviation is not subject to fuel tax or VAT-style taxes. French environment minister François de Rugy has floated an EU tax on aviation fuel that would penalise most heavily those who fly most.

Ticket taxes could be linked to emissions and flight distances. An aviation ticket tax in the EU would be lawful if it was not linked to fuel consumption and if it was applied at a common level throughout the bloc.

It proposes four possible taxes: one based on lifestyle emissions of the fuel used, one based on nitrogen oxides emissions, one judged by distance flown, and a hybrid of an aviation tax and climate impact charge.