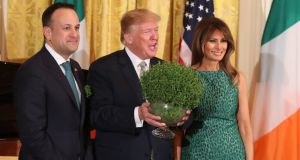 Taoiseach Leo Varadkar presents US president Donald Trump with a bowl of shamrock as Melania Trump looks on during the annual presentation ceremony at the White House in Washington, DC n 2018. Photograph: Niall Carson/PA Wire

Politicians cannot win. Leo Varadkar has been accused of hypocrisy over his vow to reduce his carbon footprint by cutting down on red meat while ordering Ministers to mount Ireland’s biggest ever St Patrick’s Day global tour.

Pressed by the need to spread Ireland’s message abroad while many countries are fixated by Brexit, Ministers will visit 60 countries, including 13 cities across the US.

“That is quite a lot of flying,” said Pat McCormack, the president of the Irish Creamery Milk Suppliers Association, some of whose members have been particularly vocal.

Economy-class flights for just the Ministers – not including staff, officials, internal flights, or business-class upgrades – will produce 30 tonnes of Co2 – needing 1,200 newly-planted trees and 40 years to offset.

So far not one Minister can confirm travel plans, what class they would be flying or how many staff will be going even though the Department of Foreign Affairs has settled on its final list.

A spokesman for the Taoiseach told The Irish Times ministers are being advised to keep their entourages “to a minimum, and to avoid first class flights, hotel suites or limousines.”

“Keeping delegations small where possible will help to reduce the carbon impact of the trips,” he added. “Travel plans will be finalised in the coming weeks.”

Former government minister and Green Party leader Eamon Ryan, who travelled to the US, India and France when he was in Cabinet, accepts that “useful work” is done around St Patrick’s Day.

However, he says more must be done to stay at home. High-quality video-conferencing would allow Ministers and civil servants to drastically cut their carbon footprint. Often it is now “as good as face-to-face” encounters.

He said some Ministers could travel by ferry and train for some or all of their tours, leaving them “time to think and work”.

Minister for Finance Paschal Donohoe will carry the flag in the UK; Minister of State Brendan Griffin heads to Scotland;, while Tánaiste Simon Coveney has Paris, Brussels, the Hague and Berlin on his list .

“If you are going to the likes of London or Glasgow it is not that difficult or much more inconvenient to take a ferry and a train, and with the Channel Tunnel Paris is as easy as can be,” said Mr Ryan.

Oisín Coghlan, Ireland director of Friends of the Earth, said Ministers should find alternatives to flying where they can, but he accepted there was a “public good” in politicians going places further afield by air.

“For example, we need them to go to the United Nations meetings on climate change to negotiate deals for lower emissions – it is part of their job. What is far more important are the decisions taken in the Cabinet room about reducing emissions as a society and helping all of us reduce our emissions.”

However, Irish Ministers must be environmentally-friendly abroad. “Are some of these trips promoting more beef and dairy, and specifically in the Far East are they promoting more milk powder? It is not a good look, and it is not a good bet for the future of the Irish family farm to be relying on that,” the Friends of the Earth director told The Irish Times.

“We get into rooms as a result of access we get through ministerial visits that we wouldn’t necessarily get into the rest of the year. Especially in the US it is a day everybody wants to talk about Ireland, from an investment or tourism point of view. It is a completely unique opportunity for a very small island.”

He said Ireland’s climate record rarely came up in talks, although many foreign investors were driving sustainability advances in Ireland after they set up operations. “Look at Salesforce’s announcement this week, creating 1,500 new jobs. Their ambition is to build what they describe as the most sustainable office building in the country.”