Minister will be judged by his decisions not by his words, Friends of the Earth says 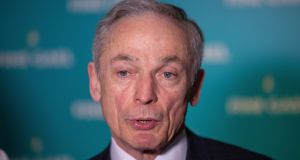 Richard Bruton said that seeking to be a leader in responding to global warming was not ‘a statement of political bravado’. Photograph: Tom Honan

Hard choices are facing every sector of society if Ireland is to respond adequately to climate disruption and to honour its commitments to reduce carbon emissions, Minister for Climate Action and Environment Richard Bruton has said.

Speaking on Friday at a consultation meeting on a cross-Government plan to be published by the end of March on scaling-up climate actions, the Minister said that seeking to be a leader in responding to global warming was not “a statement of political bravado”.

While the country was facing a world where the price of carbon was at €250 a tonne, it had to make moves now to avail of opportunities and ensure there were high living standards in a decarbonised society in years to come. Embracing such changes when it was too late and the country was locked into a high-carbon way of life would be a lot more costly, he said.

The meeting in Croke Park was attended by 150 representatives from industry, agriculture, NGOs, Government departments, academia, unions and employer bodies.

While he had responsibility for putting the plan in place and there was huge support from the Cabinet and the Taoiseach to deliver it, he had to “say very honestly this will only happen if every home, every enterprise, every farm and every community recognises that there’s change in their lifestyle; that has to be the driver of the real practical outcome of this.”

There was a need to “achieve that moment when people say, ‘yes, I want to be part of this.’ And we have to make sure as policy makers they can have trust in the information they are getting, and there’s a pathway they can follow, and they will get support along the way – and those that are worst affected are protected,” he added.

Public support for action was palpable, Mr Bruton said, while young people in particular “were way ahead of us in understanding the challenge”, in recognising “the need for fundamental, structural change in the way we live”.

If people wanted a prosperous and healthy society in 20 years’ time, they would have to pursue this course, he said. The State could not provide all the funding necessary. “Every sector has to get involved, and get engaged with it.”

ICTU general secretary Patricia King said the time had come for the nation to signal “this is not optional” in terms of the scale of climate action needed. “In my opinion, we are considerably away from that,” she added.

While extreme weather events had led to acceptance that climate change was responsible, costly, painful and difficult decisions still had to be taken. The case of Bord na Móna workers in the midlands was one such issue, which, if handled correctly, could become an opportunity.

The Paris Agreement meant no one should lose their livelihood. A just transition meant securing a “green job” for 1,300 workers, and 3,000 people with ancillary jobs. “We need to accept this and get on with doing it,” she added.

Friends of the Earth director Oisín Coghlan said Mr Bruton was talking and acting like someone who takes the climate change threat seriously. “Ultimately, however, the Minster will be judged by his decisions not by his words. His much-hyped all-of-Government plan has to actually include new policies and measures that reduce emissions in all sectors,” he added.

The plan had to be as strong as the landmark Citizens’ Assembly report on climate change, he said. “So far the Minister’s officials have studiously ignored its recommendations, first published over a year ago. Overall, Ireland has to cut its overall emissions by 6 to 7 per cent a year, every year from now to 2050, if we are to play our part in achieving the temperature goals of the Paris Agreement.”