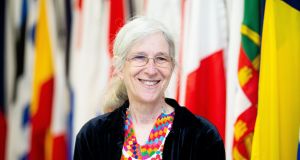 Prof Aviva Chomsky of Salem University in Massachusetts, who was speaking in Dublin on Monday at a seminar titled “Climate Change: the Whole Picture”. Photograph: Tom Honan

Using coal from one of the world’s largest open-pit coal mines in northern Colombia cannot be justified by the ESB and other energy utilities, given its impact on human rights and contribution to climate change, according to a US academic.

The scale of environmental damage caused by the Cerrejón mine in the La Guajira region of Colombia amounted to “the fourth conquest of remote regions of South America”, said Prof Aviva Chomsky of Salem University in Massachusetts.

Speaking in Dublin at a seminar titled Climate Change: the Whole Picture in the European Parliament Information Office, she said the mine, which since 2011 has supplied the vast majority of coal used at Moneypoint Power Station in Co Clare, had caused widespread pollution, exploited indigenous people living in the area and displaced entire communities.

While the now foreign-owned mine, which is 40 miles long and 8 miles wide, employed 10,000 workers, all of its coal was exported, she added, leaving most people in the area living in extreme poverty, often without the availability of electricity.

Her campaigning over 20 years stemmed from the use of the coal in a power station in Salem, but the mine was of such a scale it was “exacerbating global inequality”.

On the public’s role in seeking greater accountability, she said people could confront the social and environmental consequences of their way of life in the short run by demanding that companies, including those such as the ESB that purchase coal, live up to their claims of corporate social responsibility.

Clodagh Daly of the Latin America Solidarity Centre in Dublin said the ESB, which was 95 per cent State owned, was involved in a “brighter future” campaign that advocated “a clean energy future powered by electricity” but did not mention the Columbian coal used at Moneypoint.

On the Cerrejón mine, the ESB citing its adherence to “Bettercoal” principles was not sufficient, she said. “It’s greenwashing. It’s a way of legitimising the lack of sustainability.”

The Irish connection went further as the owners, three of the world’s largest mining multinationals, had a marketing company headquartered in Dublin, which she said was exploiting low corporation tax levels. This was further incentivising fossil fuel extraction, and made Ireland much more complicit in human rights failures associated with the mine, she believed.

In a statement, the ESB said it joined Bettercoal in 2014 “as part of our commitment to use responsibly-sourced coal”. The initiative by major coal buyers, including utilities rather than the coal mining industry, was working towards a globally responsible coal supply chain, a spokesman said.

Its mission was to promote continuous improvement in the mining and sourcing of coal for the benefit of all the people impacted by the industry – including workers and their communities. It carried out assessments using 10 key principles including human rights, workers’ rights, environment, pollution prevention and biodiversity.

Its assessment of Cerrejón “indicates that the mine’s operating principles, including how it conducts its business, treats its staff and works with its neighbours are essentially in line with the Bettercoal best practice code”. An ESB spokesman added that it was satisfied the assessment process was robust.