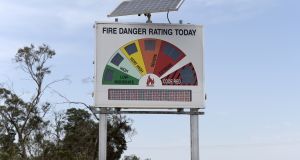 A roadside fire-danger sign signals severe and warns of a total fire ban in Melbourne on Friday. Photograph: Carla Gottgens/Bloomberg

Searing 47 degree temperatures, power failures and fires afflicted southern Australia on Friday, with one blaze creating a smoke cloud so large it began generating its own lightning strikes.

The city of Melbourne hit 42.8 degrees by early afternoon, and the state of Tasmania battled 30 uncontained fires as Australia’s second heatwave in as many weeks continued.

With the last semi-final of the Australian Open scheduled for the evening, Melbourne residents were relieved by a cool change at 2pm that lowered temperatures by 12 degrees within 10 minutes.

The duty forecaster at Victoria’s bureau of meteorology, Michael Halfpenny, said the cool change had arrived to southwest Victoria early on Friday afternoon and was finally making its way through to the city.

But parts of the state were still sweltering - Swan Hill, on the south bank of the Murray River, reached 47 degrees at 3pm, and Kyabram, in the Goulburn River Valley, hit 46.7 degrees.

The Victorian energy minister, Lily D’Ambrosio, said the state suddenly lost 1,800 megawatts of power, mainly because of the failure of coal plants and rising demand.

She said wind and other renewables “came through today” and that Victoria needed to move away from unreliable coal and thermal generators.

“People should be rightly disappointed that the power grid was not up to the stakes today,” she said. “We have a 20th century energy system, for a 21st century climate.

“The fact is our thermal generators are ageing, they are becoming less and less reliable. Wind power came through today - it produced sufficient power generation. Our large batteries were available last night when we needed them the most. Renewable energy is the way of the future and the here and now.”

Outside Melbourne, surrounding suburbs like Tullamarine, 17km northwest of the city, experienced the hottest temperature ever recorded there for January, at 46 degrees.

In East Gippsland, an out-of-control fire near Timbarra generated a giant 10km smoke column that started producing its own lightning on Friday afternoon.

The Timbarra fire grew from 300 hectares to 4,000 hectares, and began travelling southwest and threatening homes. Bureau of Meteorology forecaster Kevin Parkin said the lightning cloud, known as pyrocumulus, was “incredibly dangerous” and “almost impossible to fight”.

Meanwhile, two homes were destroyed by fires raging in a heatwave in Tasmania. The Tasmania Fire Service declared a total fire ban for the state until Monday, with 29 fires remaining active on Friday afternoon. The fire hazard was fuelled by temperatures in the high 30s and wind gusts of up to 90km/h.

A blaze was within 10km of the community Geeveston, south-west of Hobart, Tasmania fire service chief officer Chris Arnol said.

“Today is the worst day that we’ve had for the fire season to date,” Mr Arnol said.

Mr Halfpenny said the heatwave affecting the country was being driven by a pocket of “very hot air” that developed through central Australia before Christmas and which would spread up to New South Wales.

Temperatures of 42 degrees had been forecast in Sydney’s west over the Australia Day long weekend, and at the same time, a tropical cyclone had been forecast for far north Queensland on Saturday. Heavy rain and flash flooding were predicted for the area.–Guardian