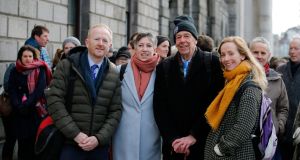 Friends of the Irish Environment (FIE) is seeking to impose a parallel track of hugely onerous climate change obligations on the State without any of the measures to ensure the public is on board, the High Court was told on Thursday.

The environmental group is seeking to quash the 2017 National Mitigation Plan (NMP) to reduce carbon emissions, which it claims has not complied with the Climate Change and Low Carbon Development Act 2015.

The group claims that because it has not achieved the reductions to which it has committed, the State is contravening the constitutional and human rights of its citizens who will be exposed to “unacceptable risks” from climate change.

In opening arguments for the State, Niamh Hyland SC defended the Government’s response to climate change. She dismissed alternative measures proposed by the environmental group, “especially because they would require huge trade-offs in Ireland’s operations as a State”.

The group has suggested the NMP be recast to achieve substantial emission reductions in the short- and medium-term in contrast to its target of an 80 per cent reduction by 2050.

The applicants were asking the law to reflect the state of scientific knowledge they have identified, but the court did not have jurisdiction in “mandating a new policy”, Ms Hyland submitted. Such a move would require the judiciary to cross the line of separation of powers and exercise an executive function, “the fundamental problem of the [FIE] case”.

She said the applicant’s arguments were centred on science, while the State’s was one based on law.

The case, she said, was not really about the plan but a vehicle for the applicant to seek a statement from the courts that the State’s approach was unconstitutional.

At EU and international level, the Government was constantly taking different actions, she said. It was clear that counteracting greenhouse gas emissions “must be on a global rather than a national scale”.

“You have been asked to intervene on a national scale,” she told Mr Justice Michael McGrath.

The Government was very aware of the need to bring the Irish population with them in addressing climate change, Ms Hyland said. This was necessary as the Government could not achieve deep decarbonisation by 2050 on its own.

There were obvious risks if the kind of change needed threatened social cohesion, she added, citing the gilets jaunes protests in France sparked by a rise in diesel prices.

FIE were seeking emission reductions; “unprecedented in an international context”. If a 40 per cent reduction based on 1990 levels was required, she said, it would mean the culling of the entire national cattle herd and ending all electricity generation.

Ireland had committed to demanding reductions at EU and international level. What was being asked for was way above what was agreed at this level, she said.

The NMP was not a complete roadmap, Ms Hyland said, but was constantly updated in light of what the science was saying and technological advances.

“Adjudicating on the NMP at a fixed point in time is misguided as it’s a work in progress,” she said.

If the plan was not doing what the applicants wanted it to do, Ms Hyland added, “that did not add up to a breach of the 2015 Climate Change Act”.

Since the plan was published, a large amount of climate actions had been pursued, many of which were embraced in the National Development Plan and the National Planning Framework to run up to 2040. Ms Hyland outlined where the State had made progress which, she said, contrasted with the pessimism in the FIE case.

The Government was very aware of the scale of the challenge in meeting 2030 targets, currently a 30 per cent reduction in greenhouse gas emissions. In reality, that target may be reduced on the basis that the way it was originally calculated was “not fair or correct”.

Ireland would meet that EU commitment because it could purchase carbon credits; “that is, effectively, how compliance will be achieved”. She accepted, however, the EPA view that reliance of “past gains” – where it succeeded in reducing emissions – and buying credits was not a sustainable approach.

On the human rights issue, Rory Mulcahy SC (for the State) said the NMP did not impose obligations on the Government to respond in a particular way. Moreover, the plan did not create the risks that the applicants had identified. The applicants had not claimed they had a right to life, to a bodily integrity and to an environment that had been infringed.