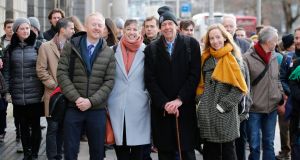 Friends of the Irish Environment are taking a legal action under the banner of ‘Climate Case Ireland’ against the Government in which it has asked the court to quash the State’s existing plan to combat climate change. Photograph: Nick Bradshaw for The Irish Times.

The State cannot claim the Government’s national mitigation plan (NMP) to reduce carbon emissions is immune to legal challenge if the rights of citizens are being severely threatened by climate change, the High Court has been told.

In the second day of the case brought by Friends of the Irish Environment (FIE), the court heard of threats to Ireland due to global warming as outlined by the Environmental Protection Agency, which were summarised by their counsel Eoin McCullough SC as “death, disease and coastal flooding”.

The science demonstrated that in addition to reducing emissions there was a need to act promptly, he said. Nobody had explained why the Government ignored measures that it agreed needed to be taken, and that others had achieved.

FIE is seeking to quash the NMP published in 2017, and claims the failure to respond adequately to the climate threat has transgressed their rights and those of Irish citizens.

The plan has an overall emissions reduction target of 80 per cent by 2050, but FIE claims it was not designed to achieve substantial reductions necessary to tackle rising global temperatures, which will pose “unacceptable risks” in coming decades.

The UN Intergovernmental Panel on Climate Change had outlined why temperature rise had to be kept to less than 2 degrees, and the need for short-term targets to be achieved by 2020, Mr McCullough added.

While Ireland was not responding adequately to such risks demonstrated by climate science, it was even failing to meet less stringent EU targets, he said.

Moreover, he said the State would have to achieve “most extraordinary reductions” in emissions over coming decades to honour its national, EU and international commitments, notably the Paris Agreement.

The Government’s failure to achieve emission reductions meant its policy in the form of the NMP “fails the test of lawfulness” and must be re-cast, Mr McCullough told Mr Justice Michael McGrath.

For the State to claim the plan was immune to legal challenge, on the basis that the courts do not get involved in policy choices and Government spending issues, did not stand up, he submitted, as it was built on the incorrect premise that FIE “is seeking to impose a particular programme of policies. We are not”.

The plaintiffs were asking for an unlawful policy to be quashed and re-cast as “it does not contain the measures to vindicate the Constitutional rights and human rights of the applicants and the citizens of this jurisdiction”, Mr McCullough said.

The case continues with the State’s defence beginning on Thursday.

In a statement, the Department of Communications, Climate Action and Environment has said “the NMP itself recognises that it is only a framework, and that it would be necessary to put in place a detailed roadmap to decarbonisation”.

“We are now putting in place the detailed roadmap,” a department spokeswoman added.