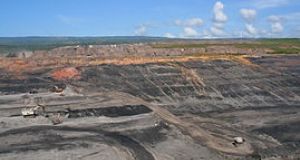 Cerrejón is one of the world’s largest open-pit coal mines, operating in one of the planet’s poorest and most marginalised regions.

Irish media outlets recently reported that ESB’s Moneypoint power plant in Co Clare imports millions of tons of coal every year from the Cerrejón mine in La Guajira, Colombia. What responsibility do consumers have for human and environmental rights violations connected to the extraction and burning of coal?

It’s a question we started asking ourselves in Salem, Massachusetts, back in 2002 when we learned that our local power plant was importing coal from Cerrejón. Cerrejón is one of the world’s largest open-pit coal mines, owned by three of the world’s largest mining multinationals, and operating in one of the planet’s poorest and most marginalised regions in a country rife with political corruption and violence.

I’ve been taking delegations to La Guajira to investigate conditions around the coal mine for over a decade now. People there are eager to show us what coal has done to their homeland. Indigenous Wayuu and Afro-Colombian community leaders explained how the town of Tabaco was bulldozed in 2001, as residents were dragged from their homes by riot police. We heard about the forced displacement of numerous villages that stood in the way of the mine, about air and water choked with coal dust, about children dying of dehydration and thirst while the mine sucks up water for its operations and its amenities such as swimming pools and golf courses for its high-level employees. We heard about loss of livelihood as hunting, fishing and farming areas were swallowed up by the mine or contaminated. We heard about legal victories, court sentences and agreements that went unfulfilled and unenforced.

As has been the case with Moneypoint, many of us in Salem had long worried about local emissions from the plant including mercury, lead, sulphur dioxide, nitrogen oxides, particulates and other heavy metals. And we worried about how burning the coal contributed to greenhouse gases and climate change. Some critics wanted to clean up the plant. Others wanted to close it altogether. The plant’s unionised workers felt that what they derisively referred to as “latte liberals” were too quick to dismiss the fact that, with the closure of the city’s textile mill and leather factories, the power plant offered some of the few decent, unionised, blue-collar jobs available to local workers. The struggling city government reminded residents that the plant’s taxes made a crucial contribution to the city’s coffers.

Some also wondered, pointedly, where our electricity would come from if we succeeded in closing the plant. Another equally polluting plant, but located in a town that was poorer, less organised, or more powerless than our own? Were we just engaging in nimbyism when we took what we thought was the more radical position, advocating the plant’s closure?

The debate became even more complicated when we started hearing from people affected by coal mining in Colombia. They weren’t impressed with our idea of refusing to buy coal from Cerrejón. Representatives from the communities suffering from the impact of the mine pointed out that much damage had already been done. If our campaign actually succeeded in cutting into the mine’s profits or forcing its closure, the communities would be left with a scarred and barren landscape of mile-deep pits and destroyed farm, pasture and hunting grounds. Furthermore, some 10,000 local residents depended on the mine for work, including more than 5,000 organised in the strong and militant Sintracarbón union.

Despite the complexities, the Colombians, both the mine’s workers and the affected communities, had a clear message for us. The mine’s Achilles’s heel, they told us, is its public image. The only way to push it to do the right thing, in its treatment of workers, communities, and environment, is to shine a public light on its behaviour. As purchasers and consumers we are uniquely positioned to do this.

Cerrejón claims that it abides by Colombian law, ethical standards, and Bettercoal guidelines. (The ESB too touts its membership in the Bettercoal initiative in defending its reliance on Colombian coal.) But on the ground in La Guajira, it’s clear that industry-run watchdogs such as Bettercoal are little more than a case of a fox guarding – or giving its stamp of approval to the behaviour of another fox in – the henhouse. The people who live in the villages and towns in the shadow of the mine have a different story to tell, and those of us who receive the profits or the benefits of this coal have a moral responsibility to hear it.

But doesn’t all that coal just need to stay in the ground? Shouldn’t we be working to end the mining and the burning of coal – as Ireland is in fact in the process of doing, with Moneypoint slated to close in 2025 – rather than applying pressure to mining companies to respect human and environmental rights?

It’s indisputable that we must end fossil fuel extraction. But as we do so we have to remember two things that those on the front lines of coal mining don’t tire of telling us.

First, the victims of coal mining should not be double victimised by the end of coal mining. Any kind of just transition must bring reparations and a decent life to those who have suffered the most from coal extraction.

Second, there is no method of energy production that does not have social and environmental impacts. Solar panels and wind turbines are made of materials extracted from the earth. Both require storage and transmission systems that likewise rely on the extraction of natural resources. Dams for hydroelectric power are one of the major causes of displacement worldwide.

A truly just transition requires that, in addition to restoring the livelihoods of those currently most harmed by energy production, we recognise that while renewable energy is part of the solution, it is not impact-free. We simply need to drastically reduce our consumption of energy in the first world.

We can confront the real social and environmental consequences of our way of life in the short run by demanding that companies, including those such as the ESB that purchase coal, live up to their claims of corporate social responsibility.

At the same time, in the long run, we must work for the kind of fundamental changes in our economic systems that will give us all a chance at a sustainable future. Subjecting corporations, both private such as Cerrejón and state-run or semi-state such as the ESB, to popular scrutiny and the popular will is crucial to both goals.

Aviva Chomsky is professor of history and co-ordinator of Latin American studies at Salem State University in Massachusetts. She speaking today in Dublin at Climate Change: the Whole Picture event in the European Parliament Information Office

1 Ireland among countries urged to consider reinstating restrictions
2 Talk of a Covid-19 vaccine by spring of 2021 is just too soon
3 ‘No demand... because there are no people’ at well-known Dublin pub
4 Sinn Féin apologises as member resigns over social media abuse
5 When will the first Covid-19 vaccine be used in Ireland?
Real news has value SUBSCRIBE