Temperatures to plunge to minus four next week, say forecasters 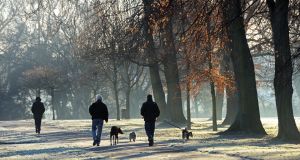 Winter promises to take hold this weekend as cold winds and heavy rain creep in over the Atlantic coast and across the country over Friday night.

It is the curtain opener for a week that promises, say forecasters, to be “unsettled and cold”, spiralling into a freezing Tuesday with February looming around the corner.

Almost nothing is spared - the weekend promises everything from gusty winds, heavy rain and even thunder; only the prospect of snow is omitted from forecasts, although even that threatens to make an appearance early next week.

Met Éireann says a spell of heavy rain will emerge along the Atlantic coast on Friday night, setting the tone for a weekend that offers little in the way of let-up.

Fresh inland winds will grow in strength along the west coast while on Saturday rain is expected to be more broadly heavy and persistent around the country, particularly in the west where hail and thunder may also make an appearance.

If there is reprieve, it is in daytime temperatures which are set to remain mild (generally between 6 and 8 degrees).

Sunday will bring gusty conditions, wind-chill and more Atlantic showers, although most parts of the country will remain dry and sunny.

“Tuesday will be the coldest day of the week with afternoon temperatures of 2 to 5 degrees at best,” it says.

“There will be showers of hail and sleet, mainly affecting the west and north where some snow is likely as well. Tuesday night is looking very cold with temperatures as low as -3 or -4 degrees and a widespread sharp to severe frost with a risk of ice on roads.”