Three arrested over machete murder of man in Co Cork 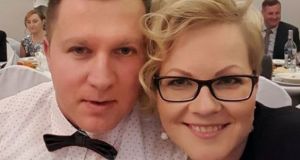 Gardai have made their first arrests in the investigation into the murder of a man who was attacked by a machete wielding gang in front of his family in his Co Cork home last year.

Detectives investigating the death father-of-two Micholaj Wilk (35), a Polish national, arrested three men at two separate locations in Ballincollig and a third location in Togher on Tuesday morning. The men, in their 30s, two from Poland and one from Latvia are being questioned at Gurranebraher and the Bridewell Garda stations.

All three were arrested on suspicion of facilitating and support an organised crime gang whom gardai suspect were behind Mr Wilk’s murder and they were detained under Section 50 of the Criminal Justice Act which allows gardai detain suspects for up to seven days.

It is understood that gardai believe the three men were involved in procuring cars and providing logistical support to the Eastern European gang that gardai believed fled the country shortly after carrying out the nighttime attack on Wilk.

The arrests follow a search of a commercial garage premises in the centre of Ballincollig by garda search teams and garda sniffer dogs supported by armed members of the Regional Support Unit in an operation that is still ongoing.

Wilk, a Polish national who had been living in Ireland for nine years, was fatally injured when he was attacked by a machete wielding gang. They broke into the house he shared with his wife, Elzbeta and their two young children at Maglin near Balliincollig on June 10th last.

Wilk was rushed by ambulance to Cork University Hospital after suffering a number of serious slash and hacking wounds to his arms and limbs but he died there soon after .

Last November at Cork City Coroner’s Court, Assistant State Pathologist Dr Margaret Bolster to said her post-mortem found that Wilk had died from shock and haemorrhage due to multiple blows from sharp weapons in association with a traumatic brain injury.

Det Insp Vincent O’Sullivan told Cork City Coroner, Philip Comyn that the garda investigation was active and several avenues of inquiry were being pursued by gardai into the death of Mr Wilk who worked as a gardener and handyman.

Gardai have privatelyexpressed confidence that they will solve the killing which, experienced officers described as one of the most violent that they had ever seen in Cork.

However officers have refused to be drawn on a motive for the killing. They say they have found no evidence to suggest that Wilk was involved in any criminal activity though it is understood their focus is on a foreign criminal gang from Eastern Europe with local Irish support.

Late last June, Gardai carried out searches at six houses in Ballincollig, Ballinhassig, Grenagh and Blackpool as well as car sales business where it’s believed Mr Wilk’s killers bought a BMW which was found on fire in nearby Waterfall on the night of the killing.

Nine vehicles, including two vans which were seized at the seven premises, were sent by garda for technical examination. It is understood that the searches and seizures of vehicles also stemmed from an examination of Wilk’s phone records and email records to see with whom he had been in contact.

Wilk’s widow, Elzbieta returned to Poland with the couple’s two children later in June, settling down at her home village some 60kms from Poznan where she and Wilk were childhood sweethearts .