Varadkar: Violence to achieve political objectives rejected on this island ‘again and again’ 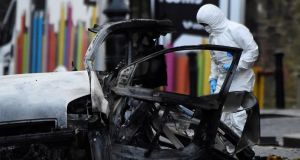 A forensic officer inspects the scene of a car bomb attack in Derry, Northern Ireland, on Sunday. Photograph: Clodagh Kilcoyne/Reuters

Public figures and politicians from across the UK and Republic of Ireland have condemned a car bomb attack on Derry courthouse in Northern Ireland.

The perpetrators of the blast have also been criticised by politicians from across Northern Ireland’s political divide.

PSNI Assistant Chief Constable Mark Hamilton said he believes the dissident republican group known as the New IRA was responsible for the explosion on Bishop Street on Saturday evening.

Northern Ireland Secretary of State Karen Bradley welcomed the widespread condemnation and said the bombers will not be allowed to hold the region back.

“This attempt to disrupt progress in Northern Ireland has rightly been met with utter condemnation from all parts of the community,” she said.

“The small number of people responsible have absolutely nothing to offer Northern Ireland’s future and will not prevail. Our voices across the political spectrum are united.

“This is intolerable violence and we want to look forward and build a peaceful future for all in Northern Ireland.

“Thank you to the PSNI and emergency services who are working so hard to keep people safe and secure.”

Taoiseach Leo Varadkar said the Government in the Republic condemns the incident in the “strongest possible terms”.

“This was an appalling, reckless and cynical act of terror,” he tweeted.

“Violence to achieve political objectives has been rejected by the people of this island again and again.”

He added: “I also want to acknowledge the good work and prompt response of the PSNI, who prevented further harm.”

Police release CCTV footage of driver running away from car outside courthouse on Bishops Street in Derry/Londonderry last night. pic.twitter.com/0nXw7qzDt9

“This pointless act of terror must be condemned in the strongest terms. Only hurts the people of the city. Perpetrated by people with no regard for life,” she tweeted on Saturday evening.

“Grateful to our emergency services for their swift actions which helped ensure there have been no fatalities or injuries.”

Sinn Féin president Mary-Lou McDonald said it was a “mindless and outrageous attack on (the) people of Derry”, while her party colleague and Foyle MP Elisha McCallion said the incident had shocked the local community.

“Derry is a city moving forward, and no one wants this type of incident. It is not representative of the city,” she said.

“I would encourage anyone with information about this incident to bring it to the police.”

Rev Ken Good, the Bishop of Derry and Raphoe, said “the time has long since passed when such violence should have been consigned to history”.

The attack, he said, “was an act of utter recklessness which showed a callous disregard for the lives and safety of local citizens and visitors alike.

“It defies belief that anyone would place a bomb on a city-centre street, early on a Saturday evening, so close to people’s homes, churches, an hotel, sheltered accommodation, nearby pubs and a large car park. St Columb’s Cathedral and St Augustine’s Church – where a group of young people had been meeting yesterday evening – have both had to cancel their Sunday morning services while the Police carry out a follow-up security operation.

“I am extremely thankful that no one was injured – or worse – as a result of last night’s explosion.

“The people responsible for the attack must be reminded that their methods have been rejected not only by the vast majority of people in this community but by an overwhelming majority of people on this island. The attack was wrong. It is indefensible. It should never be repeated.

Fiachra McGuinness, son of the late former deputy first minister Martin McGuinness, tweeted: “Whoever is responsible for this bomb in our Beautiful City tonight, live in Planet hate”.

Independent unionist MLA and former minister for justice Claire Sugden said Derry and Northern Ireland “have suffered much and long left this behaviour behind. Hopefully no one is hurt.”

“Saturday night’s attack in Londonderry city centre was an act of cowardice.”

SDLP leader Colum Eastwood, an MLA in Foyle, added: “The people of Derry are resolutely opposed to this. You represent no-one. Stop it now.”

“It is absolutely sickening that there are still people willing to bring violence to our streets and risk people’s lives and livelihoods,” she said.

“Those behind this have no excuse and no support for their actions.

“Neither have they anything to offer beyond their desire to cause death and destruction.”