Irishman sought for 387 alleged sexual offences against teens, held in US 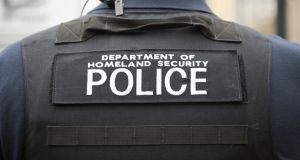 A law enforcement officer belonging to the Department of Homeland Security wears his bullet-proof vest while watching the crowd at Mardi Gras in New Orleans, Louisiana

A man wanted for questioning about 387 alleged counts of rape and sexual assault of two teenage children, mostly at a GAA grounds in the midlands, has been tracked down to an apartment in upstate New York through surveillance and utility bills.

The suspect, who had “significant involvement in the local GAA scene” in Ireland and “coached underage teams” was arrested in Guilderland, a suburb of Albany, where it is believed he has been living since last April.

Gardai had asked US Homeland Security last September to help locate them the man, a year after warrants for his arrest were issued by a district court judge.

US media report he has appeared in court and is facing an extradition hearing next week.

According to court papers filed in New York, he is wanted for questioning about the “protracted sexual abuse of two minor victims” between 2004 and 2009.

The “fugitive” is currently “charged with 210 counts of sexual assault, 177 counts of rape, one count of attempted rape, three counts of assault causing harm, one count of false imprisonment, one count of damage to property, and one count of harassment”, according to information from the Irish government, the papers say.

“These offenses were committed within the jurisdiction of Ireland,” they state.

One of the alleged victims made allegations to gardai in 2012 about being abused between the ages of 11 and 16. Much of the alleged abuse occurred at a GAA grounds, according to the documents before the northern district court for New York.

A subsequent investigation into the allegations revealed another alleged underage victim who claimed the suspect had “coached and groomed” him “from the age of at least 12, giving him a job, gifts, money and trips away from a difficult home life.”

The alleged abuse occurred primarily at the GAA grounds but also in the suspect’s home and various other locations, including hotel rooms, it is claimed in the court papers.

The second alleged victim has claimed that, over time, the sexual abuse lessened as he resisted it and physical abuse increased.

The suspect is also charged with falsely imprisoning the then teenage boy, harassing him as well as damaging his property.

“The victims have provided independent statements detailing serious and repeated abuses suffered at the hands of [THE SUSPECT],” the papers state.

The documents note evidence seized from the suspect’s home in November 2013 included hotel paperwork from one of the hotels where abuse was alleged to have taken place, as well as “pictures of a nude young male”.

At least two other witnesses described being solicited by the suspect for photographs of their genitals when they were minors, it is alleged.

US Homeland Security used surveillance, utility, cable television and postal records to track down the suspect, who was arrested at his home in Carpenter Village Apartments shortly before 7.30pm on Wednesday.

After search warrants were executed on the suspect’s “residences” in Ireland in November 2013, he “subsequently fled the jurisdiction” travelling to the US, then the UK, before returning to the US, it is claimed.

A Garda spokesman said: “We do not discuss confidential communications with police forces in other jurisdictions.”

A spokeswoman for the Department of Foreign Affairs said it “stands ready to provide consular assistance to any Irish citizen.”

1 Election 2020: Government officials express concern over pension reform promises
2 Miriam Lord: The left limbers up to woo Mary Lou
3 New coronavirus is increasingly likely to spread to EU, health bodies warn
4 ‘I don’t know if he died . . . but I don’t want him in the Tuam tanks’
5 Man ordered to perform contract for sale of lands where he lives in Co Dublin
Real news has value SUBSCRIBE