Derry bomb: ‘People are angry – they don’t want this type of activity’

In the Brandywell, where the vehicle was hijacked, there is a reluctance to speak out 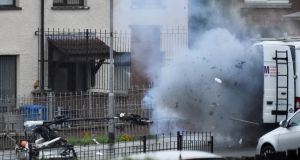 Debris from a suspected vehicle as a controlled explosion takes place at the scene of a security alert in Derry. Photograph: Clodagh Kilcoyne/Reuters

Even on a grey day, the walls of the Brandywell are emblazoned with colour.

This part of Derry is full of posters and murals commemorating the role of local women in the shirt factories, the achievements of the area’s sporting teams, and the fallen volunteers of the IRA’s Derry Brigade.

It was in this area, on Saturday evening, that a car driven by a pizza delivery man was hijacked by masked and armed men. A bomb was placed inside and driven through the city’s streets for nearly a kilometre before being abandoned outside the courthouse in the city centre. It sat there for almost 40 minutes, as cars and members of the public passed by, until it exploded, sending a huge fireball into the sky.

Dissident republicans are believed to be responsible. Five men are in custody, and the PNSI’s main line of inquiry is that the New IRA is behind the attack. The group was formed in 2012 through the merger of a number of similar organisations, and is regarded by the police as the most significant dissident republican group in Derry.

In the Brandywell there is condemnation of the attack – “appalling, absolutely appalling”, says one man – but also a reluctance to speak out.

“I can’t give my name because of my mother and father, they still live in the area,” says a young man. “Ask yourself: why would I not want to be named if there wasn’t still a fear about speaking out about your experiences in the Brandywell?”

The Brandywell is one of a number of nationalist areas on the city’s west bank in which there is a degree of support for dissident republicans – who oppose the Belfast Agreement and instead advocate the use of violence to achieve their aims of a united Ireland.

It is well known to sports fans as the home of the Brandywell Stadium, Derry City FC’s home ground, and the GAA ground Celtic Park, but it is also among the city’s poorest areas, with high levels of social deprivation, unemployment and low educational attainment.

According to security journalist Eamonn MacDermott, support for dissidents is no stronger in the Brandywell than elsewhere in the city.

“The fact that the car was hijacked in the Brandywell is just incidental,” he says. “Creggan would be more their stronghold – if they have a stronghold as such.”

The police estimate the number of dissident republicans in Northern Ireland as a whole as no more than several hundred, with a much smaller core of active members.

MacDermott says there is a “core of former Provos” who are disillusioned with the peace process. “They would attract the young fellas who have an anti-British feeling and this gives them somewhere to articulate it,” he says. “But I don’t want to overemphasise their numbers – yes, there are enough of them to plant a bomb, but they aren’t that big and there aren’t that many of them.”

Among the sitting councillors in nearby Creggan is Gary Donnelly, an Independent. The former leading dissident republican told BBC Radio Foyle that while he was glad nobody was injured in Saturday’s bomb, it was the result of a “dysfunctional” state. “It’s nearly 25 years since we’ve had ceasefires. We were promised stability, we were promised government, we were promised a proper police force, and none of that has materialised, so it’s not surprising what we are seeing unfold,” he said.

She has lived in the Brandywell for almost 40 years. “Derry has always been an area of social deprivation and a lot of people, including myself, brought our children up in areas that were socially deprived, but people can’t use that as an excuse to say and do those type of things.

“People have lifted themselves up, they have built a community infrastructure where there was one, and we’re really seeing the benefits of that now.”

Eugene O’Kane, a founding member of the Oakleaf Boxing Club, sees the benefits of involving young people in sport on a daily basis. The club was founded before the ceasefires in 1992, and part of its remit has always been to prevent young men “being led astray”.

It’s always been like that, he says. “Old heads are sitting in the house while they send young, naive people out to do those deeds. They’re safe – they aren’t going out planting bombs.”

Still reluctant to be identified, the young Brandywell man explains that he has grown up in the area in the aftermath of the Belfast Agreement.

“There would certainly be an element of people here who would still be hostile to the police,” he says. “I don’t think it’s the same as it was. There’s a deep underlying respect for the past there, but people just want to get on with their lives.”