Settlement talks break down over compensation for Garda Golden’s family 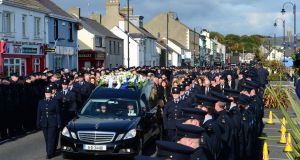 Settlement talks have broken down between representatives of the Minister for Public Expenditure and Reform, Paschal Donohoe, and the legal team for the family of murdered Garda Tony Golden who, just over three years ago, was shot five times and killed in a murder-suicide attack while on duty at Omeath, Co Louth.

It was learned on Tuesday that the assessment of compensation for Garda Golden’s widow, Nicola, and their three children, Andrew, Lucy and Alex, of Blackrock, Co Louth, may now go to a full trial before Mr Justice Michael Twomey, who deals with all Garda compensation cases in the High Court.

Talks had been taking place in a bid to obviate the necessity and family trauma of a full assessment hearing.

Garda Golden, in uniform and unarmed, on October 11th, 2015, after accompanying Siobhan Philips (23) to the house she shared with her physically abusive partner Adrian Crevan Mackin, was brutally killed by Crevan, a known dissident republican in the murder-suicide attack.

Crevan Mackin shot the 36-year-old garda in an attack during which he also shot his partner Siobhan Philips four times, including one bullet to her head, before turning the gun on himself and taking his own life.

Mackin was a convicted criminal and had been charged with IRA membership months before his death and was on bail. He had previously been given a three-year suspended sentence on firearms charges in the North. Several inquiries were mounted into the murder-suicide and the gun attack on Ms Philips.

Ms Philips, who survived her injuries, is living in Co Down. She had two children by Mackin and has issued personal injury proceedings against the Commissioner of An Garda Síochána, the Minister for Justice, Ireland and the Attorney General alleging negligence.