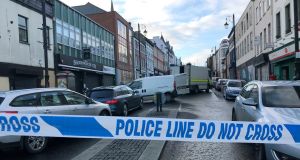 A police cordon near the scene of a car bomb blast on Bishop Street in Derry this weekend. Photograph: Rebecca Black/PA Wire

Two men arrested in Derry by anti-terrorism detectives investigating an armed robbery have been released unconditionally.

The men, aged 41 and 49, were arrested in Derry under section 41 of the Terrorism Act by detectives from the PSNI Terrorism Investigation Unit on Saturday in connection with an armed robbery in the city on January 15th last.

A lawyer acting for the two men said they strenuously deny any involvement.

Ciaran Shiels, of Madden & Finucane Solicitors, said both of his clients’ homes were “raided by a large number of PSNI officers” on Saturday.

“Both men strenuously deny any involvement,” he said, also claiming “not one shred of evidence was put to them which was incriminating in any way”.

“We are advising both clients in relation to issuing proceedings for unlawful arrest and detention,” he said. – Press Association