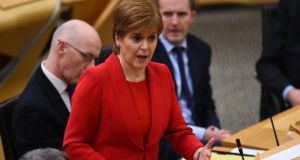 Ms Sturgeon is alleged to have met improperly with her party colleague and former first minister Alex Salmond while he was under investigation for alleged sexual harassment.

She has now yielded to opposition demands that she refer herself to an independent ethics inquiry about her involvement in the sexual harassment investigation.

Mr Hamilton, as an advisor to the Scottish government on its ministerial code, will inquire into the matter alone after another advisor, Elish Angiolini, withdrew due to a possible conflict of interest.

“If there’s any suggestion she was trying to cover up a sexual harassment complaint against her predecessor that would obviously be very serious. It’s already causing her a great deal of difficulty,” David Clegg, political editor with the Scottish Daily Record told The Irish Times.

Mr Hamilton’s inquiry is one of five ongoing investigations into the issue. It will not examine the veracity of the complaints against Mr Salmond, only the actions of Ms Sturgeon when she met with him.

Mr Hamilton was appointed an independent advisor by Mr Salmond’s Scottish National Party Government in 2013 and was reappointed by Ms Sturgeon in 2015.

A qualified barrister, he served as Director of Public Prosecutions between 1999 and 2011, when he took early retirement.

He also served as president of the International Association of Prosecutors, based in The Hague, until 2013 when he was recruited by the Scottish government.

In 2017, he was asked by the Welsh government to investigate if its first minister Carwyn Jones had lied to the Welsh Assembly about allegations of bullying within government.

Last year, Mr Hamilton cleared Mr Jones of breaching the ministerial code and said his account to the Assembly was “accurate and truthful, and not misleading”.

Now Mr Hamilton will have to decide if Ms Sturgeon broke the Scottish ministerial code when she met Mr Salmond and discussed the sexual harassment investigation with him.

Ms Sturgeon denies breaching the code and said she has referred herself to Mr Hamilton to assure “parliament and the wider public of this”.

She has admitted she met Mr Salmond at her home along with her chief-of-staff and one of Mr Salmond’s advisors and that he briefed her about the investigation into sexual harassment allegations against him.

The investigation was also discussed at another two face-to-face meetings and two phone calls between them.

Ms Sturgeon’s political opponents say the meetings were a clear breach of the ministerial code which states the first minister must not involve themselves in any Government investigations.

She has said she was acting in her role as leader of the SNP rather than as head of government when she met Mr Salmond.