‘It was worse when you can’t stop it, and it’s your sister’ 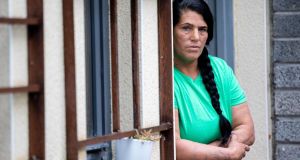 Helen O’Donoghue: Her family were in wagons and tents next to a national school in west Dublin. No one asked why the children were not in school. Photograph: Alan Place

Helen O’Donoghue (51) was four when her father started molesting her.

She was eight when he first raped her – at a bog near Thurles, Co Tipperary. She was 11 when she became aware he was raping another sister. She was 12 when she first tried to take her own life.

On the morning of her wedding, when she was 25, he beat her so badly her faced was bruised and she had lost clumps of hair as she made her vows.

The sexual abuse continued into her late teens. She did not know at the time he was also abusing five of her other sisters.

On Monday, James O’Reilly of Killeens, Ballynonty, Thurles, was sentenced at the Central Criminal Court to 20 years’ imprisonment, having been convicted last December, after a five-week trial, on 58 counts of rape and nine counts of sexual assault.

The court had heard horrific details of how he raped and abused his younger sister Christina and seven of his daughters in vans, sheds, bogs and fields over 23 years. They were beaten, starved and degraded throughout their childhoods, living in abject poverty despite O’Reilly making good money as a scrap and horse-dealer.

Ms O’Donoghue, the eldest sister, is speaking to The Irish Times on behalf of the women.

They are seeking a public inquiry into why numerous State actors apparently took no action while they, as children, were neglected, abused and deprived of their education.

They ask why a social worker’s investigation 23 years ago, after her sister Kathleen O’Driscoll reported the rape and sexual abuse she had suffered as a child, failed to save sisters still being abused.

And they want to talk about systemic racism, asking whether being Traveller children contributed to their being abandoned by the State and wider society.

Ms O’Donoghue names schools, social workers, the then Southeastern Health Board (SEHB) and a number of religious who, she says, saw the neglect but stayed silent.

She dealt with her abuse, she says, in the only way she could – “by keeping silent”.

Four years ago, the women broke that silence when they walked into Thurles Garda station and reported what had happened to them at O’Reilly’s hands, from the mid-1970s.

“I was four when it started – touching and feeling. We were living [then] in a horse-drawn wagon. There would have been myself, Christina, my sister Kathleen (3) and my brother Jimmy, Lord rest him. Margaret was the baby. He raped me fully the first time when I was eight. He drove me out to Foley’s bog near Thurles.”

The family moved around the country. “We were always pulled up somewhere isolated, away from people. He did that on purpose.”

“I never got no education. I would have loved to go to school. Nobody ever came, that I know of, to bring me back to school. I had to stay home and cook and clean, and mind the children and mind the horses. And for his needs.”

She made her Holy Communion a year late, with her sister Kathleen. And while all the other girls wore white, they were in jeans. “Obviously we realised. I felt sad really, just sad.”

For several years they were in wagons and tents in a field next to a national school in west Dublin. No one approached the family to ask why the children were not in school, about their inadequate clothing, hygiene or why they were stealing food from bins.

“We fed ourselves from dustbins, dumps. We’d go into gardens and rob food from the dustbins.

“He [O’Reilly] was always well-fed. My mother would be peeling the potatoes for him and we’d rob the skins and go out to the fire and roast them.

“I remember one day Dublin and me and Ka [Kathleen] were hiding in the ditch because we could smell the grub. A woman was cooking dinner – bits of meat and cabbage and spuds . . . She was throwing the leftovers out to the dog and me and our Ka, we just ran the dog and took the grub and ate it off the ground. I thought it was a king’s dinner. It was lovely. I said to Ka, ‘We’ll come back tomorrow’.

All the children, apart from her, were born in hospitals. She recalls no public health nurse ever visiting the family. PHNs and community midwives have been provided for in legislation, to promote healthcare to new mothers and children under five, since 1915.

“I was told all my life I was worthless, I shouldn’t be living, I was only a piece of shit, an ugly creature. He told me no one would ever have me, ever love me.

“I tried to commit suicide seven or eight times.

It is the only time during the interview she becomes tearful. Asked if it was worse to witness her sister being abused, she says it was. “It was worse when you can’t stop it, and it’s your sister. We had to mind each other. We didn’t know we could do anything about it.”

One sister became pregnant by her father at 16. “No one asked her about it in the hospital. No one cared she was only a child herself.” A DNA test, confirming he was the father, was instrumental in his prosecution and conviction.

Sr Cáit Gannon, a social worker with the Sisters of Mercy in Tipperary, worked hard to help the many Traveller families living in her region. She brought clothes and food to the family in the mid-1980s.

“She would have seen the conditions we lived in, the way we were dressed, that we weren’t being fed, that we were living in tents with straw,” says Helen.

Sr Gannon told The Irish Times she worked with up to 60 other Traveller families at the time in similar conditions. Asked whether she should have reported the children’s non-attendance at school, she said Traveller parents did not want their children in school at that time “And the schools didn’t want them.”

She was unaware of the sexual abuse. “The parents always gave the impression the children were well-loved.”

Later, in the early 1990s, a named health board social worker visited the family “maybe once a month”.

Around 1997, her sister Kathleen O’Driscoll reported the rapes and abuse she had suffered to the Garda. The sisters did not corroborate her reports, however, and the investigation ran into the ground. Helen, then just recently married, feared if she came forward her husband would leave her.

“If he left me I would have had to go back to the bog. I couldn’t go back. I do deeply regret not backing Kathleen but I had to protect myself and my family.”

On foot of Kathleen’s report, health board social workers visited three of the younger sisters at their primary school.

“They were showing my sisters dolls, but sure we never had dolls. They were asking about body parts, vaginas. My sisters wouldn’t know what that was. They didn’t understand.

“They would have been in fear, told not to say anything.”

She believes if her sisters had been brought to another venue, examined and spoken to by a social worker familiar with Travellers’ lives, they might have been saved.

“They took the wrong approach. There should be social workers who understand Traveller language, and the ways of the Traveller.”

They had no one to turn to, “either from the Traveller or the settled community”, she says, adding they had little contact with extended family – unusual in the community.

When her sisters came to her in 2016 telling her they had been raped and abused, she was shocked, angry, ashamed “and guilty that maybe if I’d spoken out I could have saved them”.

Seeing her father convicted was “brilliant . . . I never thought we would see justice. Kathleen was proud as punch that we had stood with her,” she smiles.

“It was a big fear that the guards wouldn’t believe us, but they were brilliant the whole way though, they stood with us. We wouldn’t have got the justice without them,” she says.

As children, however, “We were thrown to the wind, left to live or die.” She cannot tell her children or grandchildren any happy, childhood memory.

“All I did was beg and be beaten and molested and raped for years. We never had nothing. And all that time social workers, teachers, nurses, priests, nuns saw how we were living. No one ever came to us.

“I do believe we were let down because we are Travellers. Settled people, mostly they looked down on us Travellers, thinking ‘That’s the way they live – dirty, smelly’. If we had been from a settled family, people would have noticed the neglect more. They would have cared more.”

Mags Casey, co-ordinator of the Tipperary Rural Travellers Project which has been supporting the family, says for too long, too many have confused Traveller poverty with Traveller culture.

“Travellers do not choose to live in poverty, and Traveller children must not be abandoned to it.”

A spokeswoman for Tusla said the agency was “retrieving any files regarding the involvement of child protection services/family support services with this family” including from the former South Eastern Health Board and the HSE before the establishment of the agency.

“Following a consideration of this material, the agency will determine what type of further review might be required.” The HSE did not provide a comment in time for this article.