Momentum grows in Greens to support coalition with FG and FF 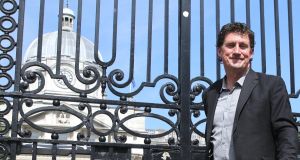 There is growing momentum in the Green Party behind those supporting a coalition with Fine Gael and Fianna Fáil, following an eight-hour convention on Thursday during which deputy leader Catherine Martin strongly endorsed the draft programme for government.

It came as it emerged the three prospective coalition parties planed to create posts for 20 junior ministers – the highest number since the 2007 coalition government.

The parties will spilt the 20 posts on the basis of Fianna Fáil and Fine Gael getting eight ministers of state each, with the Green Party getting four.

Up to 2,000 members registered to access the online Green Party convention, with almost 100 contributions from speakers, including more than 70 grassroots members.

Party leader Eamon Ryan, who was the final speaker, argued the plan was transformative. “A change in economics is coming. Neoliberalism is in decline. The Green New Deal is on the rise,” he said.

Mr Ryan said the commitment to end direct provision would give “everybody their front door”.

Dublin Central TD Neasa Hourigan, who was on the negotiating team but is voting no, argued a coalition with Fine Gael and Fianna Fáil would produce the “most fiscally conservative government in a generation”.

Of the draft programme, she said: “It fails to tackle housing and homelessness. I believe it will make them worse.”

Referring to suggestions the party might “miss the boat” by not going into government, she said: “That boat may be the Titanic.”

In the opening speech, Ms Martin – who led the party’s negotiating team – settled any doubt about her position, saying it was “the best Green deal in the history of the country”.

“I am satisfied that the deal negotiated was the best achievable,” she said.

Senior party sources said momentum was firmly swinging behind support for a coalition. Two-thirds of the 238 members who requested to speak backed the draft programme for government, while it also emerged that only 195 of 800 North-based members had registered. There was a sense that northern Greens would be more likely to vote against than for entering coalition with the deal.