Likely areas of inquiry include training and equipment, including firearms holsters 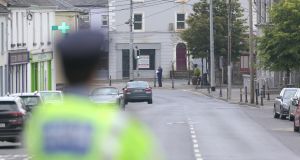 When Detective Garda Colm Horkan approached a man acting erratically just before midnight on Wednesday, he likely kept about two feet distance, as per his Garda training.

This is close enough to engage a suspect in a non-threatening manner but far enough away to give a garda time to react if the situation becomes violent.

Members usually begin such encounters with a friendly hello, and maybe a comment about the weather. This isn’t just politeness. Again, it is part of their training; a few seconds of banter puts a suspect at ease and gives the garda time to assess the situation.

“It’s all about playing it down, playing it down,” a source said. “He would have got out of the car and said, ‘Hi lad, how’s the craic? Cold evening.’ Not ‘Hey you, stop there right now.’

Garda Horkan’s approach was also likely informed by the fact that he probably knew the man. The detective had 24 years’ frontline experience, much of it in the Castlerea area, and the man lived just outside the town.

The appropriate stance is another key part of Garda training. If Garda Horkan believed the man posed a possible threat he would have assumed a boxer’s stance with his legs while keeping his hands on his belt buckle or around his midriff, allowing him to react quickly to danger while still appearing non-confrontational.

On the back of Garda Horkan’s hip was a Sig Sauer P226, a modern 15-round handgun which is issued to detectives for personal protection.

The weapon was relatively new to the detective garda. He had only been assigned to plainclothes duty in the previous few weeks, after undergoing firearms training in Templemore. This is a five-day course focusing on target practice and weapons maintenance. Unlike specialist firearms units, detectives are not taught weapons tactics. For example, they are not taught how to take cover or manoeuvre with a gun.

His handgun would have been in a leather holster, secured on top with a buttoned flap. The holster allows easy access to the gun in emergencies.

We do not know, and may never know, exactly what happened next in Castlerea. There was a struggle and one witness described hearing the words, “What are you at?”

The suspect got hold of the weapon and fired it rapidly. Fifteen shots were fired, four of them hitting Garda Horkan and killing him.

The Sig handgun does not have a safety switch in the traditional sense. Instead it has a double-action trigger which requires extra pressure to pull on the first shot. “It stops it going off accidentally when dropped but does little to stop the wrong person from using the weapon,” a source said.

Two investigations have now been launched into the incident, one by the Garda and one by the Garda Ombudsman. Inquiries will likely focus on how the suspect got the weapon from Garda Horkan, and if changes can be made to training or equipment to stop a repeat of such an incident.

Questions are also sure to be asked about why a detective had to conduct an anti-crime patrol on his own.