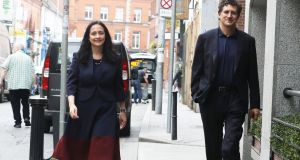 It did not sound the most appetising of prospects: a nine-hour convention of the Green Party discussing the merits and demerits of going into government. And it was all going to happen online, like being stuck in an endless Zoom loop.

Like some other things that have been thrust upon us during the Covid-19 emergency, it turned out to be much more productive and rewarding.

Sure, it did lack the passion, the heated debates and the febrile atmosphere you get at a live meeting discussing a critical motion.

But, as an exercise in democracy, it was absorbing. Up to 2,000 members looked at it. A large succession of speakers, running into many dozens, argued for and against the programme over the course of the day. In two-minute segments, they made their pitches – some matter-of-fact, some trenchantly – showing that, for all its faults, democracy in action can be impressive.

The net point was that it did give the party a chance – in the most public and transparent way – to thrash out the recommendation of its TDs to go into government. If they do go in, it can hardly be argued that it was foisted upon its grassroots.

Despite its marathon length, the turning-point of the day came right at the starting pistol, when deputy leader Catherine Martin delivered her much-anticipated speech. She had opposed coalition but then led the delegation that negotiated the programme.

There was also the problematic background matter of a leadership contest, which has run like a sore through the party over the past three months. She backed the deal last Monday night – but was her support conditional, or fully fledged? With two-thirds of voting members required, her contribution on Thursday was seen as pivotal.

In the end she plumped very strongly on the Yes side, saying it was the “best achievable” deal with many strong Green principles at its heart.

The speech was nuanced and balanced and fully took into account the concerns expressed by members.

“As a card-carrying Green Party member, there are some losses, and we should not look at it through rose-tinted glasses,” she said.

She added: “It is a risk, a huge risk, but one I am prepared to take. We must put the country first and never let it be said that we did not at times do all in our power to protect the planet.”

That was a game-changer, and bolstered the momentum behind the Yes side.

Already the feedback was tilted towards Yes from a series of online meetings from constituencies.

It was reflected in the fact that 68 per cent of the 237 members who asked to speak were in favour. Later, it also emerged that only 195 of about 800 Greens in the North had registered to vote; there was a sense that Northern Ireland Greens would be more inclined to vote against than for.

There was no illusion from any of the speakers that it was a perfect deal. “You just do not get all of the things you want all of the time,” said a Sarajevo-based member.

Many referred to the things that had not been achieved such as live exports, Palestinian rights, fee and dividend for carbon tax, housing. The list was a long one. But the difference was that some felt they were deal-breakers, others a by-product of compromise with other parties.

But elsewhere there was division. Roderic O’Gorman was adamant it was not a programme of austerity. Lorna Bogue was adamant it was. The three TDs who abstained when the deal was voted on by the parliamentary party all argued passionately against, as did several councillors including Bogue and Peter Kavanagh, who argued the cost of coalition was too high.

It was also evident that most younger members opposed the arrangement. It was right at the end that the two leading figures for and against, party leader Eamon Ryan and finance spokesperson Neasa Hourigan, made their pitches for the hearts and minds of members. But by then it seemed that the party was now edging its way towards coalition.