Places of worship, gyms, cinemas, hairdressers to reopen and sport resume from end of month

Taoiseach Leo Varadkar said on Friday that the Cabinet has approved the re-phasing of the roadmap to reopen Ireland’s economy and society. Video: RTE 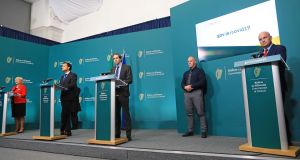 From left to right: Minister for Business, Enterprise and Innovation, Heather Humphreys; Taoiseach Leo Varadkar; Minister for Health, Simon Harris and chief medical offcier Dr Tony Holohan speaking on the update to the Government’s roadmap for Reopening Society and the economy on Friday. Photograph: Julien Behal

The Cabinet has approved plans to accelerate Ireland’s exit from restrictions put in place to tackle the spread of Covid-19.

Taoiseach Leo Varadkar said on Friday that the Cabinet has approved the re-phasing of the roadmap to reopen Ireland’s economy and society.

Apart from some exceptions, many businesses and activities will return from June 29th including places of worship, gyms, cinemas, hairdressers and sporting activities.

He confirmed that gatherings will be limited to 50 people indoors from June 29th rising to 100 people in July.

“In phase 3, which we expect to commence on Monday the 29th June, all sporting activities, including close contact sports, can recommence including team leagues for adults and children. We will all need to be careful. It will not be as it was before the start of the pandemic and for now sports will take place with very limited numbers of spectators,” Mr Varadkar said on Friday.

“We are making progress but this announcement comes with some important terms and conditions. The virus hasn’t gone away. We are all still susceptible to it,” he added.

The Taoiseach said the past few months have been amongst the toughest in the country’s history.

“In the darkest moments I think we all worried how bad things would get. How much more would people have to suffer. As a country we got through this without giving way to despair and by looking out for each other and staying hopeful.”

Mr Varadkar said the country was ahead of schedule in lifting the lockdown measures.

However the announcement “comes with terms and conditions,” he said, adding that people should continue to work from home where possible.

“Personal responsibility will become more important than ever before.”

“Taking personal responsibility means not entering a place if you can see that it is packed. It means leaving somewhere even if you are having a good time.”

The Cabinet has also agreed to provide €70 million in funding for the sports sector as it reopens at the end of the month.

“Ireland has missed sport in recent times. Communities have suffered an enormous amount. This particular allotment of money is a recognition of the tremendous community work being done by small sports clubs, large sports club and many other people,” the Minister for Sport Shane Ross said.

Restart funds will be made available, Mr Ross said, adding that “insolvency was at the door” for many sports clubs. Funding of up to €40 million will be made available for the three main field sports organisations, the FAI, GAA and IRFU. There will be resilience fund of €10 million, a sports club resilience fund of €15 million, and a re-start fund of €5 million.

Minister for Health Simon Harris said the collective challenge for the country now is “our willpower”.

“We have been easing restrictions now for over a month and we have not seen a detrimental impact.”

“But we move forward with the knowledge that globally this virus remains as dangerous as ever. We have weakened the spread of Covid-19 in Ireland but it can come back strong unless we follow the proper health checks.”

Mr Harris appealed to the public that if they have symptoms they should not wait to contact their doctor. It is taking two days at present for people to do this which is too long, he said.

Mr Harris was also asked about the resumption of routine cancer screenings which have been paused. He said the National Screening Service will outline their plans by the end of the month but that programmes would reopen in a phased basis over the summer.

The Minister also said it is unlikely that there will be a return to the same “menu” of restrictions as before if a second wave of cases emerges in the coming weeks.

Chief medical officer Tony Holohan said the public health team will consider over the coming weeks what kind of restrictions might be needed if there is an emergence of new cases.

He also said the team would re-examine the numbers allowed in both indoor and outdoors gatherings in the coming weeks.

Minister for Business Heather Humphreys said “I think I speak for most of the country when I say that the news that hairdressers, barbers and beauty salons will be able to open from June 29th is most welcome”.

She said 2020 should be “the summer of the staycation”.

On the issue of the 14-day quarantine that travellers coming into Ireland are asked to abide by, Mr Varadkar said the quarantine remains in place and that a Cabinet committee would further consider the issue next week.

Guidelines detailing how restaurants can operate when they reopen at the end of the month are to be published by Fáilte Ireland on Friday. Like pubs, it is expected they will be able to implement one-metre physical distancing in “permitted controlled environments,” rather than the current two-metre rule.

At a briefing following the meeting of NPHET, Prof Philip Nolan, chair of its Irish Epidemiological Modelling Advisory Group, said that Covid-19 was at a very low level in the State and very stable. However, a resurgence in the number of new Covid-19 infections in the State as a result of foreign travel, including from Britain and Sweden, has raised concerns among public health officials.

Fewer than 10 new cases of the coronavirus disease relating to travel outside the country were reported over the past fortnight after several weeks with no confirmed cases associated with travel.

“Over the last two weeks we have begun to see a small number of travel-related cases - it is a cause for concern nonetheless,” said Prof Nolan. Many of these cases were still being investigated, he added.

The Department of Health reported four additional Covid-19 fatalities and 16 new confirmed cases on Thursday, bringing the death toll to 1,714 and the total number of cases to 23,355.

Nursing homes account for 962 deaths or 56 per cent of all fatalities from the disease.

Chief medical officer Dr Tony Holohan said the greater the progress made on suppressing the virus at home, the more important the risk of importing cases from abroad would become.

“We wouldn’t like to see any cases being imported if we can avoid that,” he said and advised people to continue to avoid all non-essential and holiday travel to and from Ireland.

Prof Nolan said that the figures on the low number of new cases and admissions to hospitals and intensive care units showed that the disease was “at a very low level and very stable.”

But he sounded “a note of caution” that health officials “would only just now” be seeing the effect of changes made in the second reopening phase on June 8th.

Meanwhile, public health expert Dr Joe Barry warned on Friday that the reopening of pubs is “a little bit premature”.

On the balance of risks, the easing of restrictions should be taken “a little more gently” with high risk locations like pubs, he told RTÉ radio’s Morning Ireland.

Dr Barry, who is Clinical Professor in Public Health Medicine and Head of the Department of Public Health and Primary Care in Trinity College, Dublin said the issue was that a person could walk into a pub, have a few pints and walk out with Covid-19, but be asymptomatic.

“It’s a little bit premature to let pubs reopen the way they want to do it. This has to be looked at much more carefully over the next three weeks,” he said.

Dr Barry said pub is a different environment from restaurants, and would be more difficult to control. Pubs are the ideal place for the spread of the virus given the close proximity of customers, he said. Adding alcohol to the situation meant that people’s judgement could “go a little bit.”

He argued that the Fáilte Ireland guidelines on the reopening of pubs were “strange” with “a lot of wooly language.”

Dr Barry said he could understand publicans intensely lobbying to reopen their businesses, but publicans were not unique in their suffering. The situation was too serious for people to think they could just out to pubs again. After all the efforts that had been made, there was too much to lose, he warned.