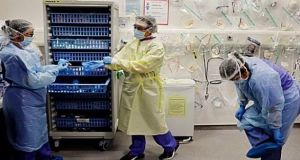 Eleven counties have had fewer than ten new coronavirus cases for five weeks in a row, according to new figures published by the Central Statistics Office (CSO) on Friday. Photograph: The Irish Times

Two more people have died from the coronavirus and 13 further cases have been confirmed in the State, the National Public Health Emergency Team (Nphet) reported on Friday.

This brings the total number of Covid-19 fatalities in the State to 1,714, as two deaths previously reported as coronavirus fatalities have been denotified, following a validation process by the Health Service Executive.

There are now 25,368 confirmed cases of coronavirus in the State, as the Government prepares to announce details of further easing of restrictions on Friday evening.

In a statement, the State’s chief medical officer Dr Tony Holohan, said the importance of people taking “personal responsibility” in guarding against the virus “cannot be overstated at this crucial point in the pandemic.”

“Hand washing, physical distancing, cough/sneeze etiquette, face coverings and knowing the symptoms of Covid-19 - and what to immediately when experiencing symptoms - is how every individual can equip themselves to live safely as restrictions are eased,” he said.

Earlier, it was reported that 11 counties have had fewer than ten new coronavirus cases for five weeks in a row, according to new figures published by the Central Statistics Office (CSO) on Friday.

Dublin continues to be the county most severely hit by Covid-19 with nine deaths from the virus in the last week. The capital is the only county to record more than five fatalities a week for the last five weeks, and report over 20 new cases in the last fortnight.

Clare, Leitrim, Longford, Tipperary, Wexford and Wicklow have had fewer than 10 confirmed cases for five weeks in a row.

Women and people aged between 25 and 44 were the most likely to be diagnosed with Covid-19, according to the CSO figures.

Ten people were hospitalised with the virus last week, down from a peak of 660 in the last week of March. For the third week in a row fewer than five Covid-19 patients required admission into an intensive care unit.

The statistics are based on figures from the Health Service Executive’s internal disease reporting system.

There have been 25,355 confirmed coronavirus cases in the State, and 1,714 fatalities from the disease.

Around 40 per cent (10,417) of confirmed cases related to an outbreak, which is defined as two or more cases together.

People aged 80 and above accounted for 28 per cent of confirmed cases from outbreaks, with the virus having a major impact on nursing homes.

The current median age of those who contracted the virus in an outbreak is 43. During the last week of April, when the virus had been spreading rapidly through many nursing homes, the median age was 73. Nursing homes accounted for 57 per cent of all cases linked to outbreaks in late April.

Women account for 59 per cent of cases linked to an outbreak, the figures outlined.

While travel accounted for 30 per cent of outbreaks in early March, the figure has now fallen to just one per cent of cases.

In recent weeks the number of cases from outbreaks in workplaces has increased from four to 12 per cent, as various sectors of the economy reopen.

In Monaghan, Longford and Kilkenny over 65 per cent of confirmed cases were associated with outbreaks.

Six counties have reported fewer than 10 deaths in recent weeks, these are Galway, Kerry, Leitrim, Longford, Sligo and Waterford. Some 65 per cent of all confirmed Covid-19 deaths have been among people aged 80 and above, with 83 the median age.

While Dublin remains the epicentre of the virus in the Republic, last week was the second in a row where the county reported fewer than 100 cases since early March. Dublin reported 59 new cases last week, down from a high point of 1,870 cases in the last week of March.

High Court challenge brought over reduction of prisoner visits due to Covid-19 21:03
Number on pandemic unemployment payment up by more than 10,000 in past week 21:08
Gardaí seeking to track movements of man (48) prior to unexplained death 20:50
High Court approves ECT treatment for elderly priest 20:47
UCC to hold virtual freshers’ week despite calls to cancel over Covid-19 fears 20:40